Kale Chips are a Lie 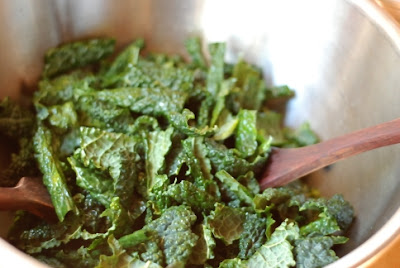 I love my deep green veggies, so this is not a veggie hater's post. However, kale chips are not my thing. I was inundated with posts about can't-eat-just-one kale chips, and even kale chip recipes go on and on about how delicious they are ("like potato chips, but healthy!" should have been my tip off that something was not right), so I made up a batch with some of my favorite olive oil and sea salt. Blech. Yes, kale chips are crunchy. However, I like my kale lightly parboiled and sauteed, thankyouverymuch. Even the boy didn't like the chips, and he is the one who usually happily mows through my food experiments gone awry. He suggested that the kale smoothie I made was a more palatable way to eat kale. For me, it's a toss up on which kale form factor was more horrible.

However, to be fair, I do love the taste and natural texture of kale, so I'm not the best one to judge creative kale forms. The dogs like the kale chips, so what I lost in food is gained by in entertainment value because feeding a dog a crunchy snack is funny.

This whole kale experimentation was based on my earnest effort to less meat. Honestly, I think it was easier to be a vegetarian, going totally whole hog (whole off the hog?), instead of just dabbling with meat here and there.  I've heard the same thing from people giving up booze and sugar: it's easier to have none at all then just a bit. My latest cookbook has helped me eat less meat: The Indian Slow Cooker by Anupy Singla. While this book is not vegetarian, the recipes I focused in on happened to be mostly meatless. 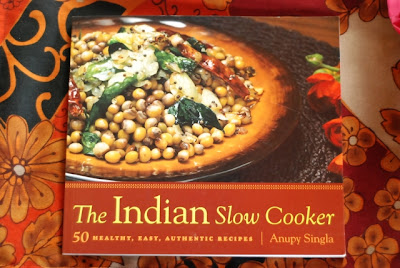 So far, I'm impressed! I was intrigued by the thought of Indian food quietly bubbling away in the slow cooker while I was out and about, so I gave it a shot thanks to a nudge by all the good book reviews. I've made aloo gobi (cauliflower and potatoes), rajma (spicy kidney beans), keema mater (lamb stew with peas), and a pumpkin stew. All came out spiced just right - it's not Indian food adjusted to American palates, but rather authentic recipes that Singla and her family put together.  Most recipes call for 4-10 Thai chilies and copious amounts of ginger, onions, and garlic. My only gripe is that some of the recipes have cooking times of, for example, 6 hours on high and 2 hours on low. Unfortunately, my simple slow cooker has temperature and time coupled, which means that I have to be present to switch temperatures, so not all of the recipes are of the "set it and forget it" genre that I associate with this type of device. They're still perfect for weekend cooking, though, when I'm out for only  few hours at a time instead of a whole day.

The bean dishes are cool because she starts you off with dried beans, and those recipes are well suited for a day at the office since the cooking times at one temperature are long. I had never tried cooking dried beans in my slow cooker since those are usually candidates for my pressure cooker, and the kidney beans turned out buttery soft.

In crafting news, I'm designing a cardigan in Malabrigo Rios that I hope to write up into a pattern. Mmmmmm, Rios is my new favorite yarn because it's the perfect marriage of color, structure, and softness - even when I have to rip something out, it doesn't bother me because it prolongs my knitting experience. How I'm going to test knit the thing in different sizes is a bit too much for me to think about, although I'm looking forward to the spreadsheets and math. I'm hoping I can find more local test knitters because, as I learned last time, it is invaluable to see the finished product for myself. Hopefully, I can give you all a sneak peek in a week or two.
Plucked from wildtomato at 1/27/2011 5 comments: Links to this post 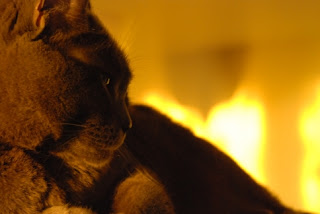 Greaseball wasn't too irritated with me. This picture is taken post sweater fiasco: I wanted to try a dog sweater I'm knitting up on him to see if it would fit. He's not a dog, but he walks on 4 paws, so I wanted to see if the front leg spacing (front paw spacing? arm spacing?) was correct. Ooooh boy. He did not like that at all, and this is the cat who can sport a pimp hat and a beret. His points of contention were that he's much more plump than my brother's dog and he has almost no neck, so this meant that the sweater was too constricting around his shoulders. 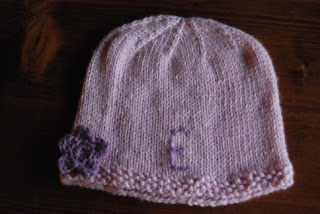 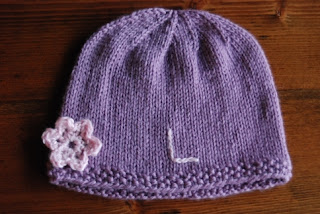 Onto some of the gift knits from last Christmas. A friend of mine has twin daughters, and I've been meaning to knit them hats. I told him this after he gave me a present, but I hope he knows that I was sincere and not just doing the "oh crap, now what do I do?" reflexive present maneuver. Their colors are totally girly, pink and lavender, so I was forced to visit my LYS. Such torture! The hat was made with Karabella Yarns Merino Superwash, and it is perfectly soft for little girls' heads. The initials on their hats were a compromise because my friend had asked that I embroider the girls' names onto the hats, but when he spelled the names out for me and they were over 10 letters apiece, I made a mental note to only use their first initial. I'm a little suspicious that he also wanted their names on their hats so he doesn't get them mixed up, but he wouldn't confess to that once I pointed it out. The pattern was just something I made up: a seed stitch brim and a stockinette cap. I added some contrasting crocheted flowers to the side so they wouldn't look so boring. 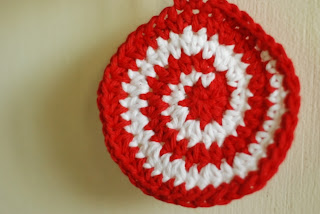 I also crocheted this hypnotic tawashi for another friend. It turned out super cute, as do most things that come from Japanese craft books. Which makes me ponder what is it about Japanese things that make me and other women I know go gaga? Age-wise, I should be over my Hello Kitty and Company phase, but since I'm not, I don't even go into Sanrio stores for fear of leaving with some cutesy chachki that I'll end up giving to my friend's daughters.
Plucked from wildtomato at 1/17/2011 No comments: Links to this post

Poor Mingus had his feelings hurt because he wasn't included in the family photos, try as he might. Surely, a gathering of people means that they are all there to give him pets! 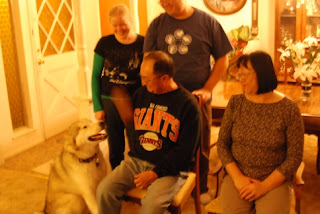 When we all got up and moved to another spot with equally poor lighting, he followed and asked politely for more ear scratches. 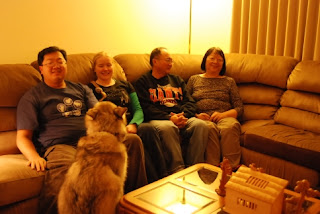 While hiking in Arizona, Vespa and I got our own family portrait. I <3 my dog! 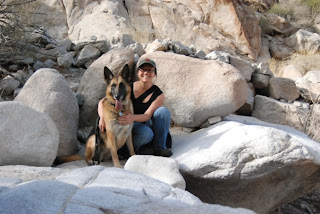 While vacation was relaxing, it is good to be home. The cats missed us a lot and haven't stopped giving us head butts. I missed my kitchen a lot because cooking with electric burners and nonstick pans make my blood boil. I missed my produce market a ton! Although lots of fruits and vegetables are grown in Arizona, it  was a challenge to find anything other than potatoes and iceberg lettuce in the sleepy town where we spent most of our days.
There was always plenty to keep me pleasantly occupied. I got loads of knitting and crocheting done, and I got in some pretty good off-road biking. It's nice to have stretches of road where you can ride for miles without encountering a motor vehicle. In order to ensure that all my skin dried up, I also went to Yosemite and had a blast cross country skiing. Finally, I think it's time to ditch the rental skis and get a pair of my very own since I have at least 3 more skiing trips planned this year. Plus, wearing shoes that other people wear and sweat in is disgusting.
Happy as I am to be home, I think the dogs are a wee bit depressed. All that Arizona sunshine translated into long hikes. They also had more people to fawn over them, plus houses with plush carpeting to rest their tushes.
The next post will have crafting content. I promise.
Plucked from wildtomato at 1/11/2011 3 comments: Links to this post 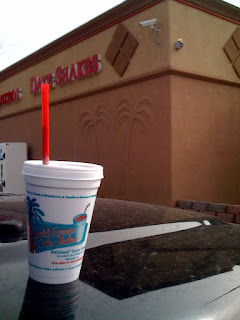 Home to the world famous date shakes.
Plucked from wildtomato at 1/02/2011 No comments: Links to this post 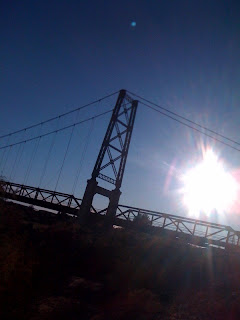 I think I am done with off-roading. Today's trip involved a ridge
drive where I couldn't decide if it was better to be in the Jeep or
out walking behind it. Both paths were equally treacherous, and
afterwards, I was so shaken up that I demanded to be taken to a
Starbucks even though the nearest one was 15 miles away.

Tomorrow, we are headed to Phoenix to stay in a haunted hotel. I am
looking forward to being in a big city and hopefully having a bowl of
pho. The Bay Area has spoiled me for outback living.

Plucked from wildtomato at 1/01/2011 No comments: Links to this post