Boredom on a Rainy Day


Although my dogs may look big and tough, here's a little secret: they melt in the rain.  Convincing them to use the backyard lavatory is frustrating because they hover by the back door and stare at me like I'm the most evil person in the world. They would rather explode then deign to dip their dainty paws in puddles of water. On weekends and days where I work from home, whatever. Not a problem. There usually is a break in the rain long enough for me to leash them up and perform a potty walk (once they start walking, they just can't hold it in any longer). On days where I'm on a schedule, meaning that they need to be on a schedule, you'll hear me saying things like "Oh, wouldn't it be so fun to go outside and pee? It'll be a blast! I'll give you a cookie! Go, go, go!"

This weekend, it's been rainy. Not as rainy as first predicted, but still a little wetter than normal. Mingus came home and pouted after his potty walk, and that's when I snapped a photo of him. What a spoiled dog. Let it be noted that this spoiling has nothing to do with me.

The boy is still on a beer making bent, logging eleven beers so far with numbers twelve and thirteen happening tonight. Although he's making only gallon batches, this still results in a ton of spent grains that we're scrambling to use.


He made some cookies for our dinner party last night that I'd say fall into the energy bar category. One cookie is enough fuel to run a couple of miles.  Although it was a vegan recipe, I don't think anyone noticed (my rude assumption here is that vegan baked goods are gross - not always true but oftentimes true IMHO).

Paella is becoming my default dinner party food since I can throw just about anything into it, it's unusual and therefore impressive, and it tastes good. While guests are hovering about, I can have the paella bubbling away as I enjoy a glass of bubbly with everyone.  Last night's paella didn't require a trip to the store since I used up odds and ends (chicken thighs, cod, hedgehog mushrooms, preserved lemons, hatch chiles, and safflower), and it turned out fantastic. I served it with sautéed opo squash, and we also had a blood orange olive oil cake, homemade imperial black pepper stout, sherry fino, a bottle of homemade wine, and the boy's spent grain cookies. In our food and alcohol induced waking sleep state, we had an odd conversation where one person tried to convince two of us that we were mispronouncing "exorbitant" (he was wrong). 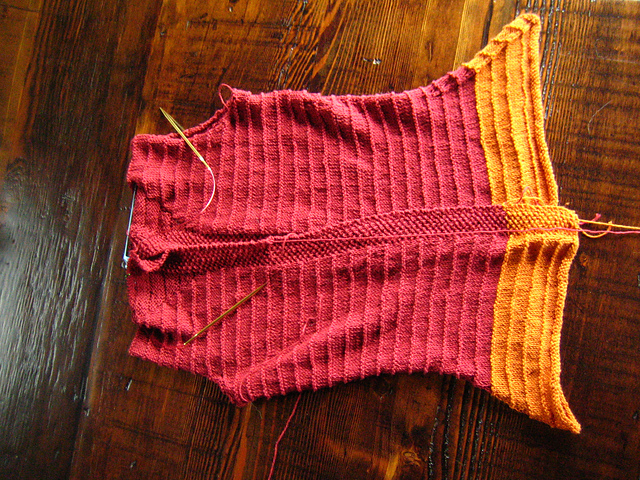 The designer, Cheryl Niamath of Fetching fame, provides terrific pattern support. I noticed some numbers that didn't quite add up on the pattern, and she thanked me and also sent me her new e-book full of fantastic little knits, Covet! The patterns in Covet are all drool worthy, and I have no idea which one to tackle first. Lots of knits in this book are perfect for holiday knitting.
Plucked from wildtomato at 3/25/2012 No comments: Links to this post

When traveling on public transportation or shopping at the produce market, I am overcome with slouch hat envy. Although the weather here doesn't even come close to being in the single digits, folks here know how to rock a hat, and I found it shameful that I was a knitter, yet I sported a naked head. Naked head no more! Introducing the Ultimate Slouch Hat. 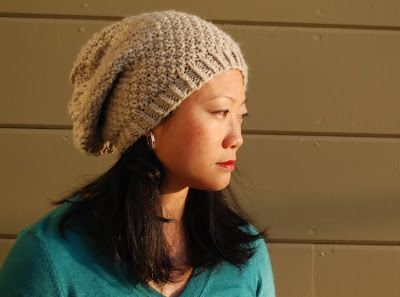 This hat lays just so thanks to short row shaping at the crown, and since it's knit from bulky Cascade Ecological Wool,  it works up at lightening speed! I think the best part is that I can get 3 hats out of one skein of Cascade Eco, so I foresee giving a lot of these away as gifts. Thanks to my test knitter, Deb! 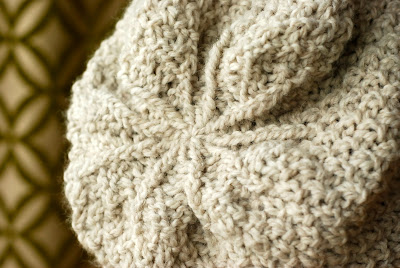 Another Wildcat Out in the Wild

Knitserland just posted the loveliest pictures of her Wildcat Canyon Scarf. I love the ripples created between the rows of cluster stitches! If you haven't checked out her blog or her designs yet, what are you waiting for? There's loads of knitty goodness to be found.
Plucked from wildtomato at 3/16/2012 No comments: Links to this post 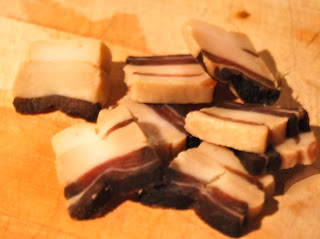 My first round of lop yuk, Chinese bacon, is finished and in our bellies! Since it's really fatty, I mostly used a slice or two in vegetable and tofu stir-fries. Because it's nitrate free, the bacon is black and not the lovely pink color of pancetta. It's not the most appetizing color, I'll admit, but once you sauté it in a wok and get a good coat of crispy char on the bacon, it looks like any other hunk of fatty meat.

Since lok yuk is not smoked, I'm not sure why it's called bacon. It's more like Chinese pancetta. First, you marinate 2-inch slabs of pork belly in Shaoxing wine or Chinese whiskey, light soy sauce, and dark soy sauce. I also added some brown sugar, although I'm not sure if it's traditional. The pork belly stays in the marinade for 3-5 days. At the end of that time, poke a hole in the meat with a chopstick, insert string through the hole, and tie the meat piñata up above your kitchen sink. According to my aunt, this is what my grandmother used to do, so the boy and I decided that we'd do the same as a nod her. 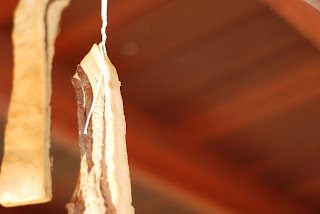 Again, the boy wanted to know if I was trying to kill us, but I pointed out that all of my mom's siblings are alive and kicking despite growing up eating lop yuk.  No pink slime as thrown into the mix, either.
Plucked from wildtomato at 3/15/2012 No comments: Links to this post 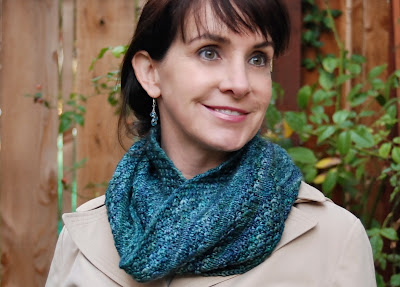 Introducing the Wildcat Canyon Scarf! I just posted this pattern in Ravelry, and and if you'd like a copy, you can click the handy little button above.
If I had to choose which yarn I'd take on a desert island, it would be Malabrigo Rios. I just love the stuff! It's soft against the skin, pleasurable to knit, and the colorways are rich and dreamy.  I knit this scarf with 2 skeins of Malabrigo Rios in the Agua colorway. 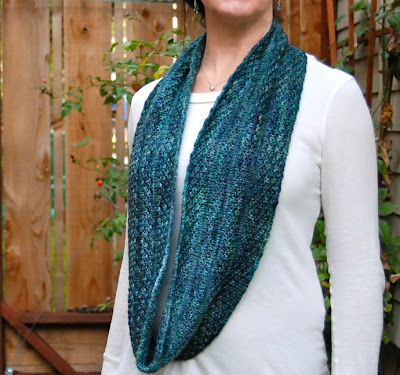 The scarf circumference is 50-inches, so it's long enough to wear in a single or double loop. I've been wearing mine doubled up over a v-neck sweater.

Many, many thanks to my test knitters with the most-est (who, coincidentally, all have first names that end in vowels): Rani, Tina, Tara, and Elena. And thank you to my beautiful model, Jen! She was a good sport when I called her up and told her I'd be wielding a camera in her face in um, about 15 minutes.  She rocks it!
Plucked from wildtomato at 3/12/2012 3 comments: Links to this post

When first told about Pinterest, I didn't get it. I have Ravelry to organize my knitting and crocheting, so what else could I need? I'm clearly not a fashion hound as evidenced by my fabulous Russian red purse + orange-red cardigan + maroon shoe ensemble I wore yesterday (please don't report me to the fashion police), and I'm not much for window shopping. Pinterest just seemed like online window shopping.

But, along comes a house project... Now, I'm hooked! I can collect pictures of room layouts and furniture that work with our place, and instead of sending the boy a string of bookmarks, he can see what I'm talking about on my boards. Cool beans! He even started researching DIY soapstone countertops since that's what I've earmarked to replace our disgusting peach counter tiles. If anyone here has a soapstone counter, please leave me a comment. Is the upkeep is as easy as it is promoted? Sanding out scratches and finishing with mineral oil seems too easy.

I'm wildtomato on Pinterest. I posted a slouch hat that's hot off the needles. Once I get the pattern written up, I'll be on the hunt for more test knitters. And speaking of test knitters, another thank you to my four fabulous test knitters! The Wildcat Canyon Scarf should hopefully be out this weekend. I traded a jar of sauerkraut for some graphic design work, so timelines aren't exactly written in stone.

Have you seen the new Spring Knitty? I am currently in love with Flaming June because those mitered corners are pure genius. Plus, I've come to the conclusion that I really don't wear anything but cardigans. Bay Area weather combined with climate controlled buildings means that layers are a must since I have a teeny, tiny bandwidth of what is an acceptable temperature.
Plucked from wildtomato at 3/09/2012 1 comment: Links to this post 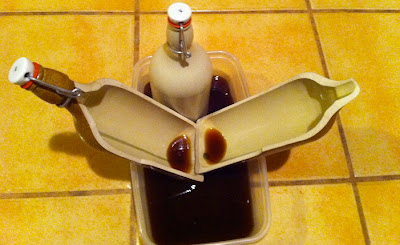 As I was rushing out the door on a Friday evening, I noticed a stream of brown fluid in my office. The stream went from under my desk to the futon, roughly 10 feet. My first reaction was panic: which animal do I have to take to emergency vet? As I started mopping it up, it didn't seem like vomit or pee (oh, the joys of having pets!), and it didn't smell bad. In fact, it smelled kind of good.

I followed the stream to its source: one ceramic beer bottle, neatly split into two pieces. Our secondary containment system was a little lacking, but it did capture some of the beer-to-be. Now, beer bottle bombs has a spot on my phobia list.

The boy made two more gallons of beer last night, bringing our total to 7 gallons, or 70 bottles. Well, 70 minus 1 bottles (of beer on the wall/floor). He's mastered the "making two beers at once" skill, and all I have to do is hold the strainer and funnel as he pours the beer into the gallon carboys. There is also little to no discernible swearing going on while the beer making process is afoot.

As I write this, I'm smugly sipping on a bottle of a coffee and coconut stout. Yes, smugly! I roasted the green coffee beans, and the boy threw it into the boil. +10 DIY points for us. However, don't worry, I won't be so smug tonight when I'm wide awake at 2 AM thanks to the coffee in this stout.
Plucked from wildtomato at 3/03/2012 2 comments: Links to this post