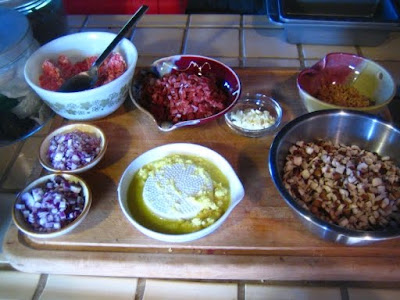 This year, we did more marathon eating, but we did manage to make a few dishes.

This is all the fixings for a traditional sticky rice stuffing (nuo mi fan) that my family makes in addition to bread stuffing. If you are lucky enough score an invitation to a Cantonese banquet, one fancy banquet food is a deboned, whole chicken stuffed with nuo mi fan, and then deep fried. In my family, when we make this at home, we skip the whole stuffing of the chicken, or turkey, and simply serve the nuo mi fan alongside the roasted poultry. I've turned my in-laws onto this traditional food, too, and they request "sticky rice" at the holiday table now.

I also made a couple loaves of whole wheat bread, sans starter (it died!), but I didn't bring them to the dinner table because they turned out like hockey pucks. I could've sliced it up and said it was German bread, but I suspected that there would be plenty of other carbs for us to enjoy. We speedily made some coconut pumpkin pie ice cream in place of the bread. No one seemed to mind the substitution, but homemade ice cream does have a way of covering a multitude of cooking errors.

I don't think I've posted this yet: the boy's first sweater. He knit the parts on the knitting machine, and it took me about twice as long to seam the sucker up. And, apparently, it takes me a million times longer to post the finished product. He is almost done with another sweater, but I told him in no uncertain terms that I am not seaming it again, so this one will be seamed by sewing machine. He sealed the deal (of me not seaming) when he said that it would only take him 10 minutes to seam up his sweater. Fine. Knock yourself out, kiddo. 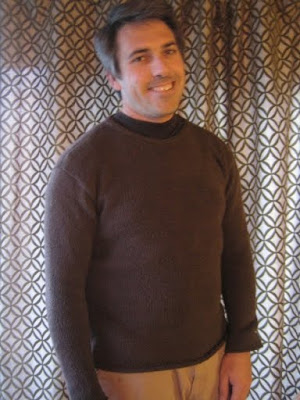 A Hiss and a Purr 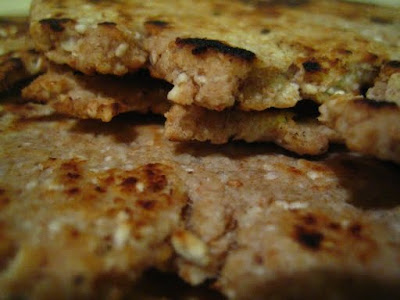 Whole wheat tortillas? FAIL! I milled the flour too course because attempts at a fine, pastry flour resulted in a blown electrical circuit. Next time, I need to supplement the whole wheat flour with some high gluten flour.

It's a shame that these were so thick and dry, because I had freshly rendered lard that went into them. The lard came from the fat scraps from hunk of pork butt cut into chunks for chile verde, because when I put the chile verde in the oven to stew, I threw a cast iron skillet full of the fat scraps in there as well so the fat was rendering alongside the meat stewing. 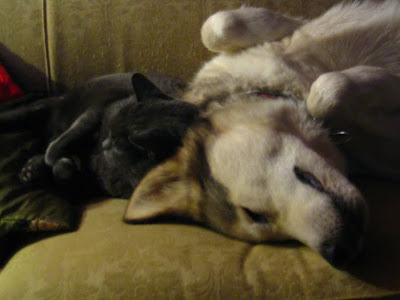 Greaseball is allowed on the couch, but not Mingus. The only reason he got away with it was because these two were being so stinking cute. It's a rare moment when the two brothers snuggle up together.
Plucked from wildtomato at 11/09/2009 6 comments: Links to this post

Forget the wine and the beer 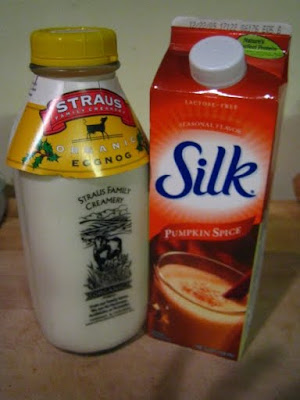 I have Straus eggnog and Pumpkin Spice Silk! If these two beverages were to go head to head in a steel cage death match, the eggnog would devour the soy milk. It's not that the soy milk is bad, but it cannot compete with the sinfully good Straus milk.

A Slouch for Fall 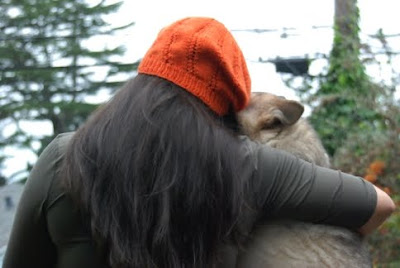 A bit of stash busting happened this weekend, along with a bit of Mingus snuggling. I knit up another Slouch for All Seasons (.pdf link) for an old friend who visited us this weekend. She picked out the yarn on Halloween, and I blocked it and snapped a quick photo before she left today.

I used about 3/4 of a skein of Cascade 220, and it was knit up on size 5 needles for the band, and size 7 needles for the body. Other than those changes, no other modifications were made to the pattern.

Colorway and dye lot information are long gone. I probably recycled the ball band in one of my purging fits, but no matter. This yarn was meant to be something for her.
Plucked from wildtomato at 11/04/2009 3 comments: Links to this post