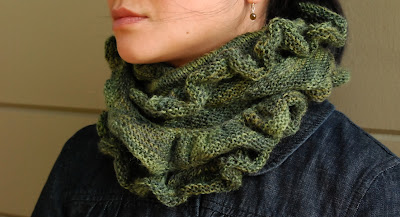 The Tilden Park Scarf pattern is the June Sock Stash Knitdown prize for the Stash & Burn podcast! Knit something out of your sock yarn stash, follow the instructions June SSK thread on Ravelry, and you are entered to win a free copy of my pattern. Additionally, from now until the end of July, you can get $1 off my pattern by entering the promotion code stashandburn at checkout. 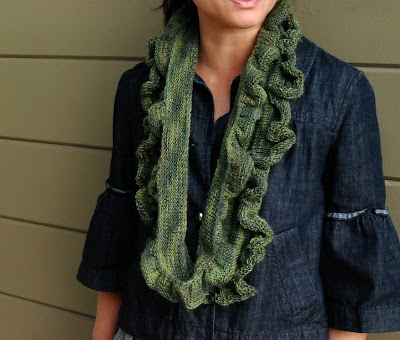 If you haven't listened to Stash & Burn, you're missing out. Jenny and Nicole give smart commentary about all things knitting and the occasional movie and television show.

Enter the contest today! Good luck!
Plucked from wildtomato at 6/23/2011 No comments: Links to this post 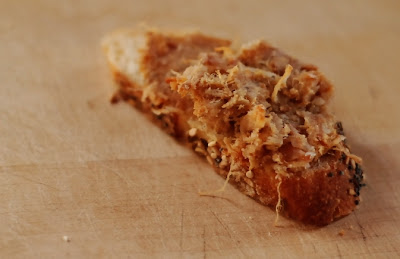 I had one of those problems that really wasn't a problem last week: what to do with 1.5 pounds of pork belly? Originally, I wanted to buy a pork shoulder from Marin Sun Farms, but by the time I went the farmer's market, they were out of that cut. Since I wanted to buy some meat for the week, I grabbed a packet of fresh pork belly instead with the intention of making thit kho, a Vietnamese dish consisting of caramelized pork and eggs.

I had a last minute change of stomach when it was thit kao making day, and instead decided to make a pork rillette. Whenever we order the Butcher Block at Wood Tavern, some sort of rillette is featured, and while I know the cured meats take some dedication, the rillettes seemed like an "afternoon project" kind of dish. 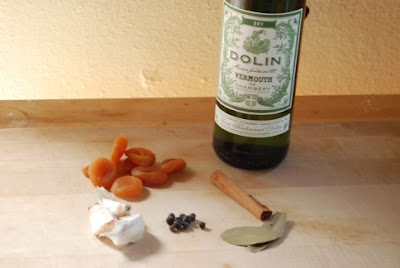 Rummaging around my pantry, I found dried apricots, juniper berries, bay leaves, and a cinnamon stick. I also added a few cloves of garlic, a tablespoon of salt, a few grinds of pepper, and a cup of dry vermouth. The pork belly was cut into 1/2" squares, the apricots were chopped, the garlic cloves had their skins removed, and the juniper berries were lightly crushed. Everything was tossed into a cast iron pot with a lid, and the whole thing went into a 250°F oven for 4 hours. 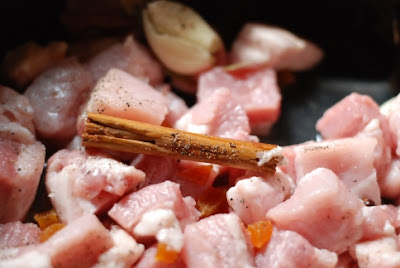 After two hours, the pork belly had rendered enough fat to poach the meat, and after 4 hours, the meat was falling apart. I shredded the meat with two forks, similar to making ropa vieja or carnitas. I added more salt while shredding the meat - the meat should be on the verge of being too salty since this will be spread onto bread. 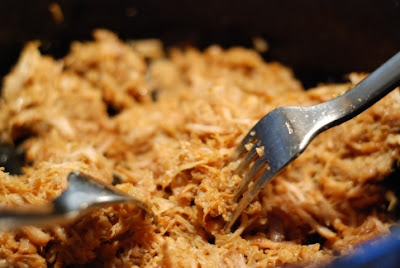 The shredded pork mixture is strained, with the fat and juices reserved, and then pressed into a dish. I put them into a big baking round, but more traditionally the meat is pressed into ramekins. 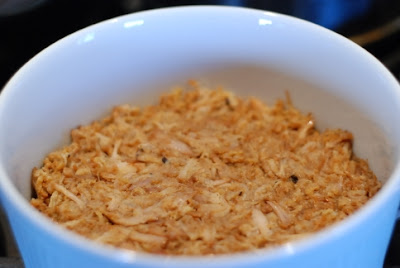 The reserved juice and fat is poured back over the meat, the dish is covered and refrigerated for at least 24 hours so the flavors can mingle. 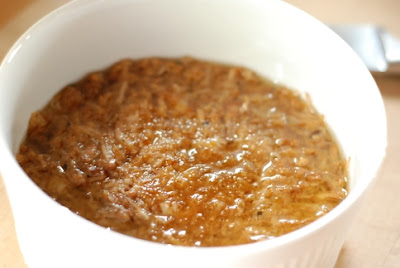 Before serving, let the rillette warm up to room temperature so the fat will be easy to spread. Enjoy it smeared onto a slice of baguette with a touch of mustard and a cornichon.
Plucked from wildtomato at 6/19/2011 1 comment: Links to this post 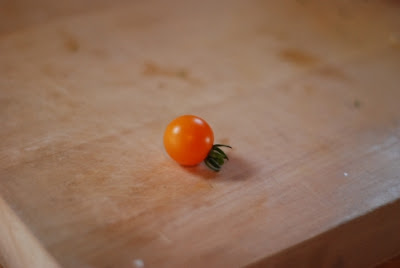 My first tomato of the season! It's been unusually wet and cool this summer, and that equals a tardy tomato crop. So, while others are sustaining themselves from their gardens on a daily basis, I've been monitoring this one little tomato for the past few weeks. Solemnly, I took a photo, then popped it into my mouth. Bliss. 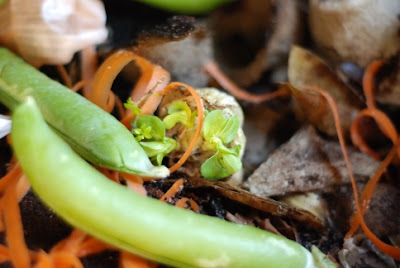 This is a close up of my worm bin. Last week, I tossed some bok choy ends into the bin. This week, they're all regenerating and kind of freaking me out. It's hard to tell in this photo, but there are three sprouts (is that the right word?) coming from the stem. The boy wants to plant these and add them to his little discarded vegetable garden which thus far only has some sprouted onion tops that are thriving. The problem with those sprouted onion tops is that the old onion tops are still attached and they look rotten, so I'm not quite sure what is going on there. However, the boy will persevere because he likes thinking of himself as the punk gardener who goes around breaking conventional gardening rules. 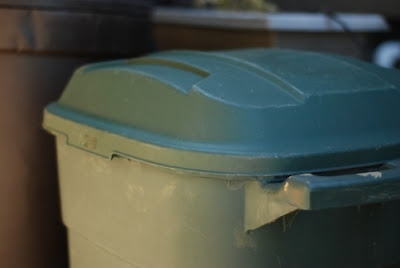 Accidentally, this bin became a second compost bin. It's been going strong for a few years, dutifully digesting paper egg cartons and overflow vegetable scraps that my official worm bin cannot handle, and to my astonishment, worms have magically appeared inside the bin. Mind you, there's no holes in this bin and it sits on a concrete slab. How did they get in there? I suspect that our pitchfork was the vector. Regardless, I'll have to decide when it's done so I can let it rest and fully decompose.  Currently, although only 1/4 full, it feels like it's full of lead.
Plucked from wildtomato at 6/14/2011 3 comments: Links to this post 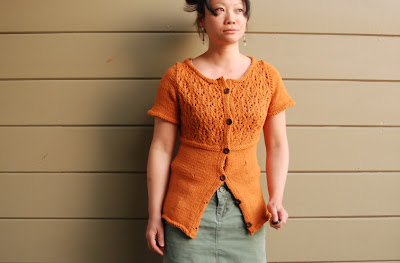 Another cardigan down! Wait, didn't I say last time that it was time to stop knitting cardigans??? This makes my 5th cardigan of the year, and I'm beginning to think I should have joined one of those knit 12 sweaters a year challenges.

As you can see, I am procrastinating my sock knitting with cardigans. Usually, that would be just fine, but since I'm going to Sock Summit this year, I do want to have a sweet pair of socks to show off!

This is Gaia by Kristen TenDyke. It is knit using Spud & Chloe's Sweater in colorway 7515. Sadly, I bought this yarn Stash's going out of business sale. Sigh, that was such a fantastic store. I wrote a bunch of notes about this pattern on my Rav page, so I'll spare you them here. The one thing I should mention is that I used a lot less yarn than specified; I could have knit this using 3 balls of Spud & Chloe if I would have made it a bit shorter. 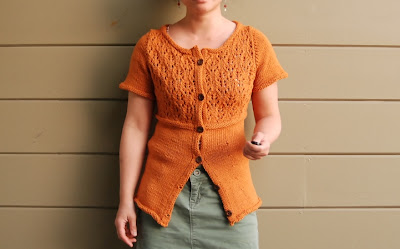 It was fun knitting set in sleeves again, and I'm especially happy with the method used in this pattern to knit the sleeve cap in place. Very, very slick.

OK, socks are next FO. At least one sock. I promise. However, I've been obsessively sketching cardigans in my design notebook, so I hope have the resolve to not knit up that last sweater's worth of yarn in my stash.
Plucked from wildtomato at 6/13/2011 3 comments: Links to this post 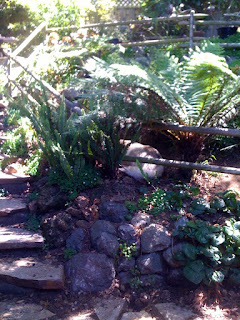 The boy built this fence to keep the dogs away from our delicate ferns.
Plucked from wildtomato at 6/10/2011 3 comments: Links to this post

If I cook like it's summer, will summer come? 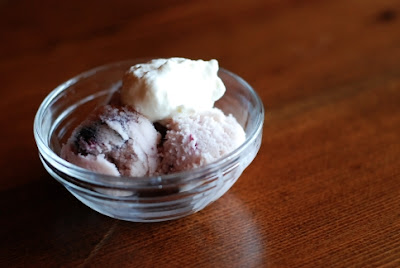 Sunshine seems increasingly rare these days, and the past weekend was full of wind and rain. Yet, I had a 1/4 pound of cherries that needed a purpose. Since they weren't that sweet, I stewed the cherries with some vanilla sugar, a pinch of salt, bourbon, and a splash of balsamic vinegar. 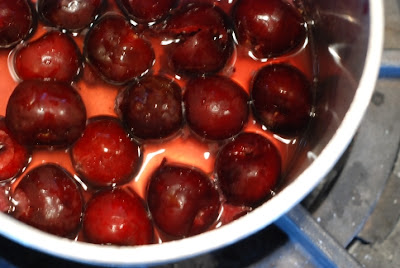 I roughly mashed them after stewing, then folded them into vanilla ice cream batter. Since I was feeling lazy, I didn't commit to making a vanilla custard. Instead, with a nod to the Ben and Jerry's ice cream recipe book, I whipped a couple of eggs and added sugar, milk, and cream to the batter. It was simple and more airy than a custard based ice cream, but the drawback is that it isn't as rich (only 2 egg yolks versus the 4-6 I'd normally use) and is hard to scoop. Still, is there such a thing as bad ice cream, especially when served with bourbon whipped cream?

I'm almost finished with another cardigan (someone please stop me!) that I can post soon. But for now, I'll leave you with a picture of my afghan. I stated the afghan on 5/24/10, and as of today I have 85 rows complete. I'd love to have this complete by the end of summer, although with the way this summer is starting out,  I should try to finish this ASAP. 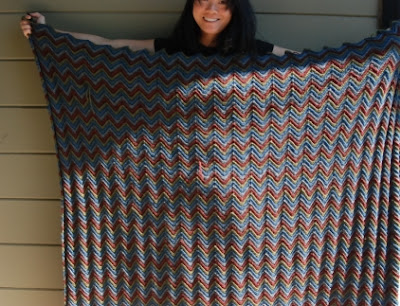 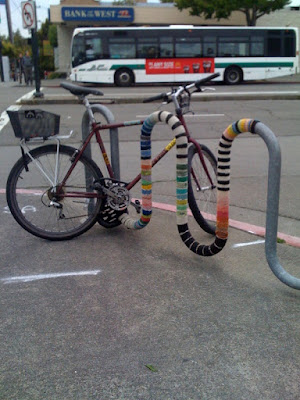 As I was walking around town, disconnected with everything surrounding me because I was stuck thinking about mundane tasks that needed to be done, it was nice to be snapped back to the present by a bit of unexpected knitting.

The knitting revolution has begun!
Plucked from wildtomato at 6/04/2011 6 comments: Links to this post