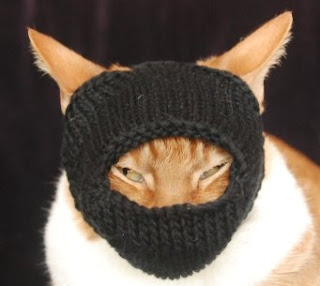 Yes, I am aware that technically this is an International Cat Mask, but I couldn't resist the lure of the ninja. Besides, cats are natural ninjas. They are sneaky, stealthy, and when provoked by wild spiders, they are swift assassins.

This mask is knit starting at the eye hole and ending at the ear holes. Much like a toe up sock, the beauty of this ninja mask is that, cat willing, you can try it on your cat as you knit and adjust the pattern as you go. I'll give you an outline of what I did, but unless your cat has the same head size as Fifty-Fifty, you'll have to modify the pattern.

As much as I hated to do it since I was aiming for an easy pattern, I added some short row shaping to the lower part of the mask. Without it, the mask wouldn't lay flat against my cat's head. You can see pictures of my earlier attempt here. Round 2 of this pattern is a doozy, but if you get through it, you'll be rewarded with your very own ninja cat.

Don't forget to check out my other free patterns listed on the sidebar!

Materials
• 60 yards of DK or worsted weight yarn. I used Tahki Cotton Classic because it's in my stash.
• 2 US size 8 circular needles, any length, OR size needed to achieve gauge. US size 8 DPNs may also be used instead of 2 circular needles
• 4 stitch markers
• Row counter
• Tapestry needle

I used the cable cast on instead of the long tail cast on because it looks better and it is not as stretchy. Remember, this is the mask's eye hole.

Finishing
For maximum ninja appearance, whip stitch about 1/2 cm of the eye hole at each end. You can skip this step, but I found that the eye hole puckered in quite an unsightly, un-ninja like manner without seaming outer edges. Weave in all ends.

If you make this, as always, I'd love to hear from you and see your ninja cat!

This work is licensed under a Creative Commons License.
Plucked from wildtomato at 4/30/2008