This is all kinds of awesome! It's such a spot on spoof of Portlandia.
Plucked from wildtomato at 9/10/2012 3 comments: Links to this post

Email ThisBlogThis!Share to TwitterShare to FacebookShare to Pinterest
Labels: cats 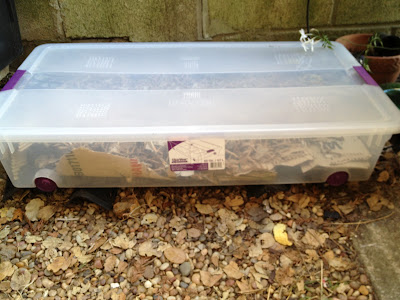 The flurry of canning activity resulted in tomato skin and seeds that overwhelmed my worm bin. Although I contemplated buying another worm bin, the bins on the market were sporting $100+ price tags, and that seemed like a lot to pay to house creatures that prefer to live in garbage. Plus, since the whole point of this is to be more green, it didn't make sense to me to purchase another hunk of plastic.

I rummaged around the house and found an old plastic storage container with a lid. Perfect! A little (crooked) drill handiwork to make air holes, and I had myself a homemade worm bin that cost nothing but a bit of time, and not much time at that. 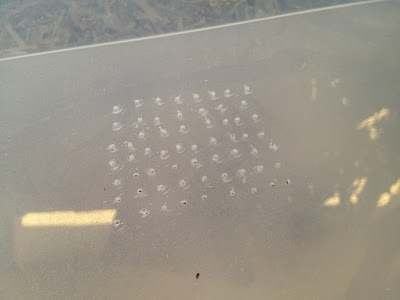 Once the lid had holes, in went some cardboard, fruit and vegetable trimmings, and a few scoops of worms. Yes, I made worm lasagna! 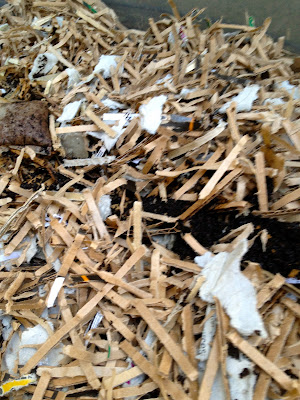 Now, in a few weeks, this bin should be established and I can start adding more scraps to it. Done and done!
Plucked from wildtomato at 9/09/2012 2 comments: Links to this post 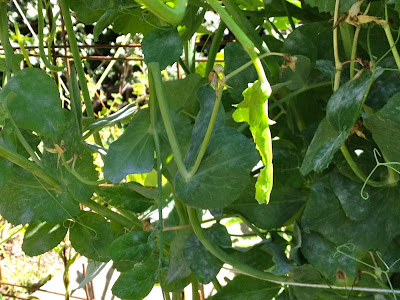 Don't mind if I do, said the asshole deer.

I walked Mingus and Vespa around the garden perimeter, actually encouraging them to do their business on the nearby bushes to hopefully discourage future deer visits. The dogs thought it was a trick, but it's better than the other suggestions I saw on the web, one of which included having your husband (yes, it said "husband"!) pee around the perimeter. Perhaps that would be a viable suggestion if our garden was in the backyard, but I really don't feel like risking the boy's status as an upstanding citizen just to repel a deer or two. 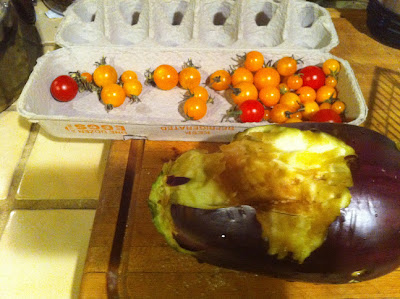 Don't mind if I do, said the dogs.

What kind of dog mauls an eggplant? Could it be the same dog that ate about 10-pounds of tomatoes and then leaked tomato pee for the next 24 hours? Perhaps.

Fall (!!!) is almost here, and with fall comes a flurry of last minute food projects. Pickles? Check. Sauerkraut? Check.  Sour beer started? Check, but it won't be ready until next year. 110-lbs of tomatoes turned into sauce? As of last night at 2 AM, check.

My canned tomato sauce results are as follows: 17 quart jars, 14 pint jars, and 25 half pint jars. This is a grand total of 121 cups of local, organic sauce! Last night, I did a tomato sauce marathon with the last 44-pounds because I was ready to be done and because some of the tomatoes were becoming soft. Plus, I didn't want to wash all the sauce pots and cutting boards only to use them again the next night. With all of this behind me, I cannot figure out if I canned too much or too little. I used up every last drop of the tomato sauce I canned last year, and I started out with 50-lbs. Still, instead of a warm feeling of a job well done, I see all the jars of tomato sauce lined up in the pantry and I think of the television show Hoarders.
Plucked from wildtomato at 9/07/2012 4 comments: Links to this post