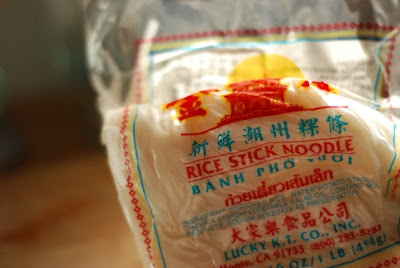 After I put four packages of rice stick noodles into my hand cart, I heard someone say, "These noodles are for lazy people who don't want to soak their rice sticks!" Was that directed at me? Probably. There is something wonderful and magical about noodles that cook up in 10 seconds. The texture is chewier for these fresh noodles, better than the dried ones, but I didn't feel like telling that to the person who potentially just called me lazy. Let her eat mushy noodles!

Ranch 99 (or is it 99 Ranch) is a fun place to browse. I don't go often because the produce is wrapped up in Styrofoam trays and plastic wrap, the meat is of questionable origin, and the parking lot is a slow motion bumper car ride, but I am thankful that there is a Ranch 99 near me. The alternative would be to go to Little Saigon, Chinatown, Korea town, and whatever the Malaysian, Filipino, and Thai communities are called. I also don't go often because I easily can spend an hour there browsing and buying tons of stuff that I have to scramble to use up before it goes to the dumpster gods.

In addition to the lazy people noodles, I also found brown rice ovalettes! I have high hopes that the brown rice ovalettes will be chewier and nuttier than their white counterparts. For the uninitiated, ovalettes can be put into soups, or boiled and then stir-fried just like the wide rice noodles. 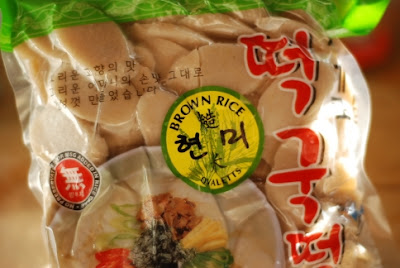 From the library, I checked out The Kimchi Chronicles cookbook, the companion cookbook to the television show. There's a wonderful recipe for an easy chicken stew that I've made twice now, and I plan on making the fried seafood pancakes tonight. The hardest part of the chicken stew is browning the chicken - and both times I managed to get some hot oil splattered in my eye. So, perhaps it isn't hard, but dangerous.

Much to the boy's dismay, there's another batch of kimchi in the refrigerator and some more fermenting in a crock - apparently the smell makes him sick, although he loves to eat it. Since the smell only really emanates from the refrigerator once it's opened, I consider it a good way for him to diet and drink less beer.

Since I can't figure where else to post it, I've been using my Twitter account to post inane food commentary. So, if you'd like to read or share inane food and occasionally knitting commentary with me and sometimes talk about cats and dogs (it's about as focused as this blog, which is to say "not focused" and full of my typical typos and grammatical errors), follow along at spindlesnspices.
Plucked from wildtomato at 11/29/2011 8 comments: Links to this post

Email ThisBlogThis!Share to TwitterShare to FacebookShare to Pinterest
Labels: noodles

Thanksgiving is for Spent Grain 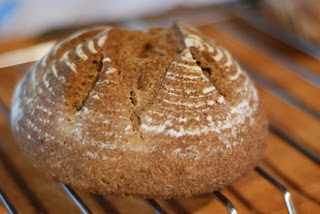 I know that Thanksgiving is supposed to celebrate abundance, but I get a kick out of turning things that would otherwise go to waste into something that is fit for a feast! After making the beer, we had two trays of leftover spent grain. I decided that the best way to use the grain would be to dry it, grind it, and use it to add a kick to my baked goods. 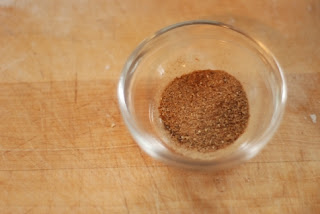 The flour tastes sweet and has caramel notes, so to accentuate those features, I made a slow rise bread with blackberry honey and spent grain flour. Bread flour and yeast were thrown in to help it rise since I didn't want to end up with a brick. 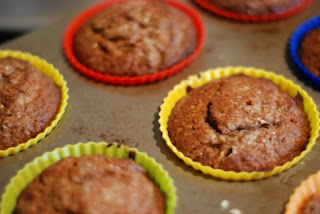 For the muffins, I spied a fantastic recipe for Spent Grain Applesauce Muffins from Brooklyn Brew Shop.  For my version, I added 1/2 the sugar, opted to use the butter instead of oil (splurge! it's worth it!), used 1 cup of our spent grain flour, and used apple butter that we canned an embarrassingly long time ago. I had to cook the muffins an extra 10 minutes, for a total of 30 minutes, because my batter was so dense and moist. The resulting muffins are sinful. No one will know that it came about from pantry scraps.

My folks are cooking the Thanksgiving dinner, and although I do love to host my most favorite holiday of the year, they are both fantastic cooks, so I'm content to sit back and enjoy everyone's company. My mom will make her famous turkey jook,  potstickers, and sticky rice stuffing, and my dad will make a juicy turkey and the best gravy ever. What's special and unusual on your Thanskgiving table this year?

Happy Thanksgiving, everyone!
Plucked from wildtomato at 11/23/2011 6 comments: Links to this post

Hope in a Jug 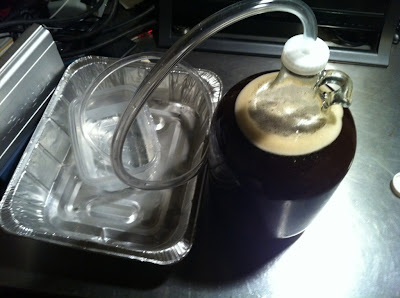 Nestled next to our external hard drive on the old, stainless steel laboratory table is the boy's first attempt at beer. A couple of friends joined him on Sunday afternoon to tend grains on the stove. In a month, we should have a lovely chestnut brown ale from an all-grain brewing kit we got from Brooklyn Brew Shop!

I have 2 baking pans full of spent grains drying in the oven, and those grains will be incorporated into breads, muffins, and perhaps some dog treats.  We only brewed a gallon of beer. If we had the spent grains from 5 gallons' worth of beer, we'd have to make friends with chicken ranchers and start another compost bin! Any spent grain recipes you can throw my way will be greatly appreciated.
Plucked from wildtomato at 11/21/2011 1 comment: Links to this post

2nd Round of Baby Knits 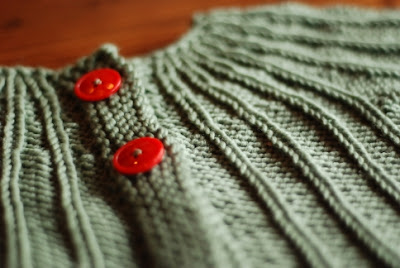 My prolific friends and relatives are popping out babies left and right, so my knitting needles have been dedicated to baby clothes. Two more baby yoked cardigans found a home with wee ones. 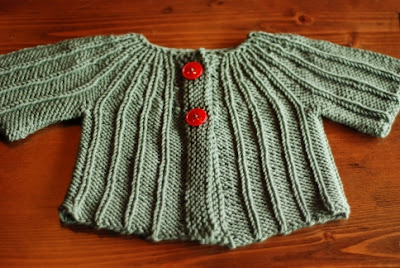 In the span of a few months, I've made six of these. Six! 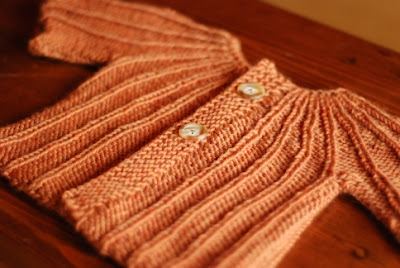 Since these all went to non-knitters, I made a point of sending the cardigans off with Knitterella gift tags so the recipients' know that how to take care of the garments and that these are handknits that required more effort than clicking on a gift registry and entering in my credit card number.

Out of the first four cardigans I sent off over two months ago, I heard back from three sets of parents and received some very nice thank you notes and emails! Although I know that giving a gift should have no strings, I really do become grumpy when I don't gets notes acknowledging that someone has received the gift, especially if I mailed it off. My assumption at that point is that the parents do not appreciate handknits, and future important events will mean a gift card instead of something heartfelt. I know that new parents have a lot going on, but it's not like my time is expendable - carving out the time to make gifts sometimes means doing nothing but gift knitting with my free time. Knitters, how do you decide who gets the handknits and who gets something less personal? 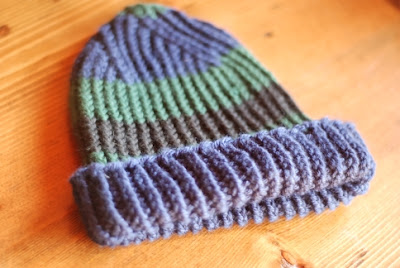 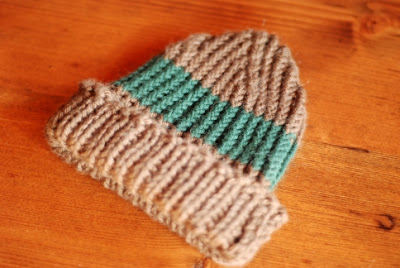 It's also time for my annual hat drive for an old friend's kids. He gets hats every year because he sends me adorable pictures of his kids in my handknits, and he lives in a cold, snowy place where ears and noses can fall off. This time, I knit them the Marsan Watchcap, scaled down for a baby and a little boy. Nothing like kid hats to use up partial balls of yarn! These were made using bits of my Debbie Bliss Casmerino Aran yarn scraps, making me want to knit another cardigan with the stuff. 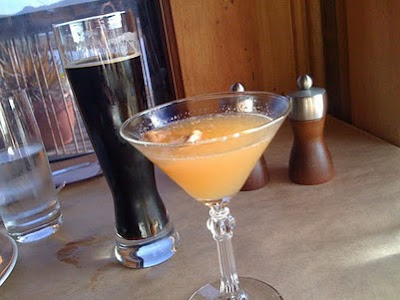 Last weekend, we celebrated the passing of yet another year in Guerneville, a place close to home but just far enough to feel like a vacation. I planned out all the restaurants: River's End, Boon, and Applewood Inn. River's End had the lovely cocktail you see above, a seasonal drink made with hard apple cider and Maker's Mark (and now I want that cocktail glass and those salt and pepper grinders), Boon had a cherry habenero chutney that adorned a duck breast, and Applewood Inn introduced me to Bohemian Creamery and Mendocino uni. My favorite meal was at Applewood Inn, but I guess that's not surprising since we went all out and ordered the tasting menu (5 courses paired with 5 wines) and the place has one, well deserved Michelin star.
Plucked from wildtomato at 11/19/2011 1 comment: Links to this post 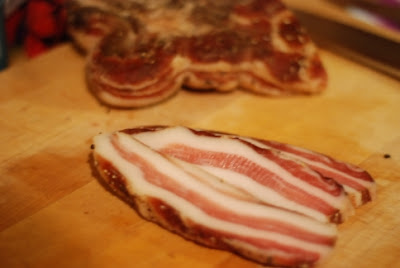 The scary Chinese curing salt with the label whose ingredients simply read "curing salts" did the trick. I unwrapped my pancetta today, a day early because I couldn't wait, and sliced into it. It was a rosy pink, and boy was I proud. Three of us tucked into bowls of creamy, fatty spaghetti carbonara with no thoughts of death or dying, although death by spaghetti carbonara would be a worthy way to go.

Tomorrow, I am going to use some more pancetta and saute it with shredded Brussels sprouts. I see more cured meat in my future.

Perhaps I'm tooting my horn too soon since it has only be a couple of hours since dinner...
Plucked from wildtomato at 11/09/2011 6 comments: Links to this post

Email ThisBlogThis!Share to TwitterShare to FacebookShare to Pinterest
Labels: panecetta 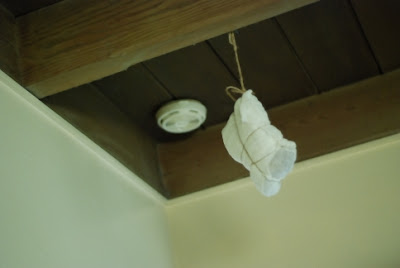 In three more days, my homemade pancetta will be ready for some carbonara action! This project was spurred by a tutorial from The Tipsy Baker and an old blog post by Michael Ruhlman. My meat piñata is hanging above the bedroom door not because I think that's particularly romantic, but that location happened to have a hook conveniently located on the rafter. Plus, that spot is cool, the temperature ranges between 55-65 deg F, and mostly dark.

Strangely, the dogs are not going crazy from the smell, not that this is a smelly process. No scary mold or rotting smells are emanating from this hunk of meat. Yet, I expected that their sensitive dog noses meant that I would find them sitting underneath the meat mistletoe 24/7, but they are uninterested in it. This worries me because I am already paranoid that I'll die from eating homemade cured meat. Maybe the dogs know something I don't? 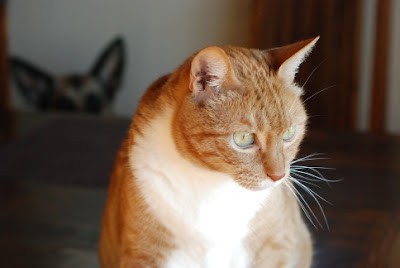 The picture above represents two annoying things (Mondays put me in an annoyed mood, you see):

1. Fifty-Fifty on our dining room table. I have an afghan in progress, and it rests on the table when I'm not working on it. This system is flawed because now the cats, particularly this cat, thinks the table is now an acceptable resting spot. No bueno.

2. Vespa's obsession with Fifty.  You can see Vespa's signature pointy ears in the pic. Some days, they are squabbling siblings who go out of their way to annoy each other .And, although it looks like Fifty is the victim, she is far from innocent. Again, no bueno.

A third thing that annoys me is my weakness for all things gummy. I bought a box of fruit snacks, 75 packages of gummy fruits, and I've managed to eat about half of them in 3 days. I think this is why I feel cranky: sugar overload. Or at least I hope this is what it is, because if it's a character flaw that is much harder to correct. This is also why my way to not eat crap must be to never, ever have crap in the house. Chocolate? Meh. Cookies? Meh. Gummy anything? GIVE IT TO ME NOW!!!!! Please tell me I am not alone in my odd "food" obsession. Anyone?
Plucked from wildtomato at 11/07/2011 4 comments: Links to this post