Near the end of September (yes, this cat hat is a little tardy), there is this little thing called Oktoberfest that happens in Munich. When I went a few years ago, I have fond, yet hazy, memories of drinking liters and singing the ultimate drinking song for all ages: Ein Prosit. Perhaps this is not the name of the song, but it was the only lyric I could sing convincingly in German. So, anyway, many liters later, I found myself wearing a hat. An Oktoberfest hat. Kind of like this hat that Fifty-Fifty is now sporting. 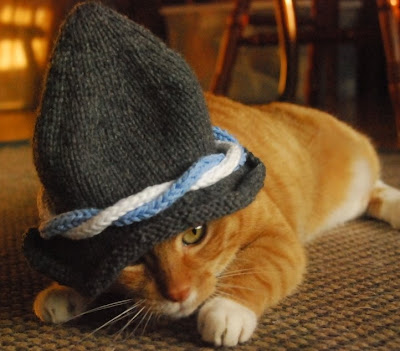 I believe I was clutching the floor in this exact position, too. Let's just say that drinking a "mass" at 9 in the morning is unnatural for this lady. Seriously, you may all think I'm drunk to post such silly things, but let me assure you that I do not drink and post with reckless abandon.

For those of you just stopping by just for this pattern, rest assured that this hat is not an anomaly. Don't forget to check out my other free patterns listed on the sidebar! 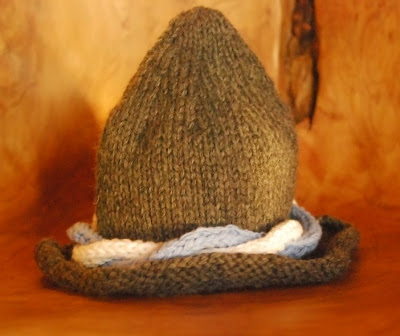 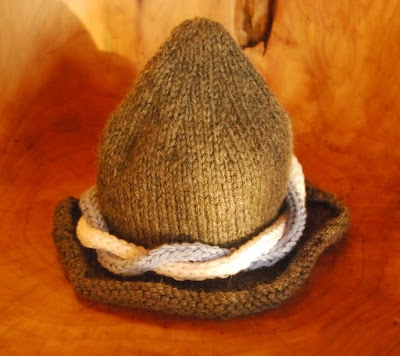 Brim
Pick up 60 sts around the base of the hat using the 16" circular needle. Join to knit in the round, placing a marker at that point so you know where the round begins.

Finishing
Weave in all ends. Twist blue and white i-cords together, and tack them around the hat. Place the hat on your cat, and guard your booze just in case Fluffy gets a hankering for beer. Oh, yes, and please send me a picture if you make this! Your pictures make this crazy endeavor worth it.

This work is licensed under a Creative Commons License.
Plucked from wildtomato at 10/29/2008