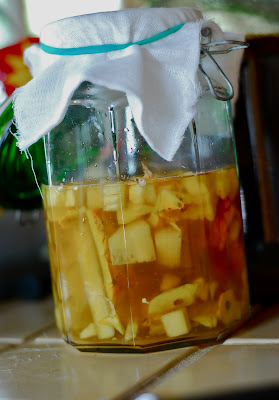 Wanting to squeeze every last cent of my impulsive pineapple purchase, I was reminded of this post from the Tipsy Baker. Using this recipe, I hope to have pineapple vinegar in as little as two weeks. Sans maggots, if everything goes smoothly. The potential vinegar is hanging out with a one gallon batch of potential s'mores beer.

If I see anything that resembles a maggot, the whole experiment is going into the compost bin. I'm still not recovered from plucking my potential Korean garlic bulbs from the garden two weeks ago. When I uprooted them and turned them around, what should have been roots turned out to be maggots or some other form of wriggly white cylinders. Blech. My Pam Pierce inspired dream of providing for all of our garlic needs were crushed, and the addition of maggots ensures that I won't try again for a long time.

I think my squash and zucchini are actually shrinking! Too much water? Too cold? What is wrong? If I can't get a batch of summer squash, it doesn't bode well for an off-the-grid future. We'll have to trade beer and bread for our staples in the post apocalyptic society, but how will we grow the wheat?
Plucked from wildtomato at 6/30/2012 No comments: Links to this post 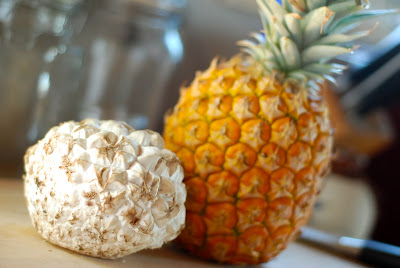 The pineapple and the puffball: our dinner tonight. Both were impulse buys, and it wasn't until I placed them side by side that I noticed their similarities. Can you tell I've been thinking about a hexagon baby blanket that I need to seam?

The pineapple jumped into my basket after I tried a sample. "Do you like pineapple? Here, try this." And I tried it. I gave the guy a nod, he asked when I planned on eating the pineapple, I told him tonight, and off I went with a 1-pound pineapple in my possession. It's so good and sweet that I am not even going to bake any of it into the yogurt cake I've been making over and over again with summer's fruit.

For the puffball, I think just frying it up with a little bit of butter is the best way to eat it so I don't dilute its earthy, nutty flavor.  I have some English peas that need a good shuck, then maybe I'll make some focaccia or some other grain to go with tonight's dinner. Or maybe a puffball and pea pasta will be dinner. I think half the fun of buying unusual ingredients is planning on what to make! 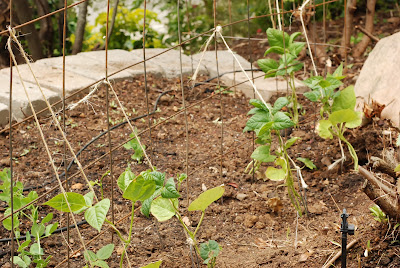 For the most part, my garden looks the same as the last time I posted pictures. Living in the fog means that my summer vegetable harvest isn't quite the same as the days of my 100 degree summer childhood, but I can grow things like lettuce with ease. (OK, lettuce not as delicious as snap peas, but I'm trying to be positive here.) I think I spied one ripe sungold tomato today, so I'll cut it in half and share it with the boy for tonight's salad. My zucchini and yellow squash plants are the opposite of prolific, but I suppose I can start eating the blossoms. I have some goat cheese and cornmeal all ready to go.

The boy went snail and slug hunting in our garden last night and nabbed 5 critters munching on tender shoots. I've been going after the ivy in our yard (well, more like in our neighbor's yard, but ivy doesn't have a notion of property lines so I have to cut it back aggressively) to destroy more snail and slug habitat. If anyone knows how to train cats to kill slugs and snails, let me know. I still cannot figure out a way for my cats to earn their keep, although they keep me entertained as hat models.
Plucked from wildtomato at 6/28/2012 2 comments: Links to this post

Email ThisBlogThis!Share to TwitterShare to FacebookShare to Pinterest
Labels: garden

Last weekend, we happened up on an urban farm tour given by the farmer herself, Willow Rosenthal. If you recognize her name, it may be because you've read Farm City, visited City Slicker Farms, own a copy of The Essential Urban Farmer, or have heard her speak about food and farming related issues.

The tour lit a fire under our butts because the house on tour has a similar microclimate to our own house, so the next day, the boy and I spent 7 hours building a retaining wall to terrace our hilly front yard. The result is a functional food garden! We carried over a ton of rocks (no exaggeration!) up the hill, severely chopped back some overgrown bushes and trees, and carved out a little space that we hope will provide us with snap peas, blue lake beans, broccoli, beets, carrots, salad greens, and radishes. We already had tomatoes, zucchini, crookneck squash, and limes growing with success, so we hope this will just add more food to the table. (Interesting fact about summer squashes: the first blooms are always male. I thought my squash was defective until I learned that!)

If this garden turns out well, we'll expand it out to other parts of the yard, but for now, our tiny 10' x 5' plot is keeping us busy.

If you have any interest in small footprint food gardens, check out The Essential Urban Farmer. There are ideas in there for maximizing your space that were new to us, and that made gardening in my little foggy microclimate seem entirely plausible. The North Berkeley house we visited had enough eggs and produce to provide weekly food boxes to 6 families.

The boy is still brewing delicious beer, and I found a worthy home for the leftover (spent) grains. I posted on a community board to see if any neighbors with chickens would be interested in some grain. One person has 5 chickens who love the stuff, and she was nice enough to give me a dozen eggs and some sweet, juicy limes from her backyard! It's such a sweet deal, and no grain goes to waste. There's only so much spent grain muffins I can make and eat.


Last week's hot weather, hot for me being in the upper 80's, meant that I didn't want to spend much time in front of the stove top. This is when my pressure cooker really shines! I got on a risotto making kick because my pressure cooker makes the whole cooking process less than 15 minutes, and not only that, but most of that time my burner is set to simmer - a temperature low enough to melt, but not boil, butter. My first risotto was corn, pesto, and zucchini with a (not so) healthy mound of Parmesan. The pressure cooker is also a champ at making quick stocks for the risotto cooking liquid. I save all the veggies scraps, rough chop an onion, throw in a few peppercorns and a bay leaf into the pressure cooker and let it do its thing for 10 minutes.

My second risotto was a paella inspired risotto. I threw some smoked paprika, chorizo, English peas, saffron, white wine, and more zucchini into the pressure cooker with the arborio rice, and the resulting dish exceeded expectations!  I was really craving paella that day, and this curbed the craving. Sure, there weren't any crispy bits on the side and bottom of the pan, but I fixed that the next day by frying up the leftover risotto in a cast iron pan and adding fried egg to the top.

A Potato Pancake As Big As Your Plate? 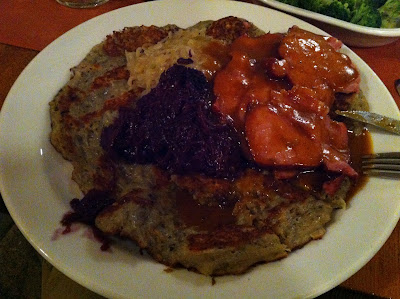 Yes, potato pancakes the size of your dinner plate do exist in the magical Czech Republic! If you can stomach the secondhand smoke, something living in no-smoking-indoors-and-near-doorways California did not prepare me for, the pub food in Prague is what all other pub food should be based upon: it's hearty, tasty, goes well with beer, and cheap! Adorning that giant potato pancake are two types of sweet and sour cabbage, and many slices of roast pork.

Although Pilsner Urquell is the dominant brand of beer there, not much of it passed my lips. Us travelers called it "pissy Urquell." Thankfully, there's a strong (and growing!) microbrew movement there, as evidenced by this technicolor beer sampler from the famous Pivovarsky Dum. 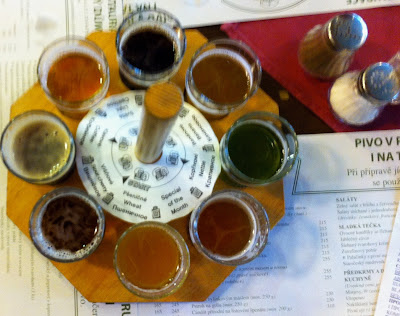 The green beer at 3 o'clock is stinging nettle beer. There's also a sour cherry, a banana, and a coffee beer here.

I also sampled many variations of svikova, larded beef with a sour cream sauce that is traditionally served with the densest potato dumplings I have ever had. Every restaurant seemed to outdo itself in the "who can make the densest potato dumpling?" category, but I am not a fan. I was served them a lot in Germany, and I also pushed them aside there. Oh, what I wouldn't have given for a serving of brown rice to sop up all that gravy instead of those blasted dumplings (again, exposing my CA roots).


Besides eating, we rafted, walked a ton, visited a creepy ossuary in Kunta Hora, got lost, got found, rode bikes and almost died in Ghent, and made a beer pilgrimage to Belgium. We ended our trip with a (unintended, due to the holiday) 8-mile hike to the Trappist Westvleteren Brewery. Yes, the theme was beer (for him) and food (for me).


I can see the appeal of traveling the world - discovering at least 20 new things each day is addicting, and it makes it very hard to slip back into everyday life. Traveling for an hour and having the language switch from French, to Flemish (basically, Dutch), to Czech was unbalanced, but exciting in an odd way. Too bad I kept on trying to speak Spanish to everyone. Apparently my brain categorizes all foreign language into my Spanish speaking compartment. But, I am happy to be home because of my cats, my dogs, and my washer and dryer.
Plucked from wildtomato at 6/04/2012 7 comments: Links to this post