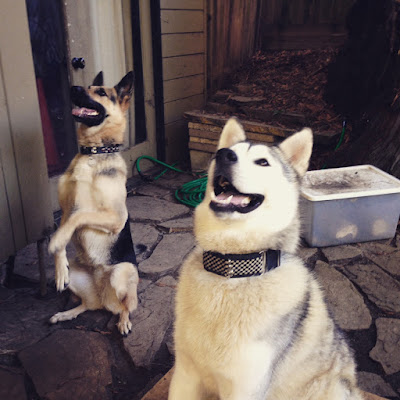 Unbeknownst to me, but not at all surprising, the boy had been looking for another dog to call his very own. I argued that Sesame was enough dog for the two of us, but the heart wants what the heart wants and that same argument didn't work for me when it was just us and Mingus. So... Here's Jaco!

Jaco's name rhymes with "taco," and he is loosely named after Jaco Pastorius. My hope is that Jaco won't get kicked out of a club by Santana, although that would be one hell of a bar story. If you can spot the relationship between the name Mingus and Jaco, congratulations! It wasn't something I would have known if it weren't for the boy. We floated so many names for this dog, bad names like Brozo ("bro" plus Bozo the Clown), Hoodoo, and Goose, but name fatigue set in. So, when we finally found a name the other person didn't hate, the deed was done. Dog tags were ordered, license and obedience class forms were filled out, and Jaco it is! Also, for the record, Brozo was not a name I came up with. I don't ever want to be associated with the creation of that horrible, horrible name. 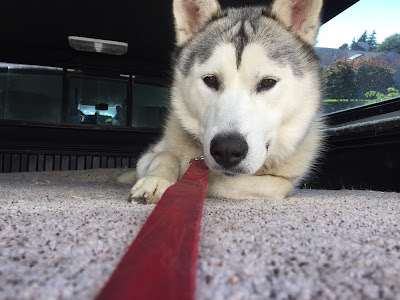 Yes, he looks a lot like Mingus. This was very disturbing to me when we first met him at the Hayward Animal Shelter. I didn't want a Mingus replacement. However, once we got to know him, the similarities stop at his looks. 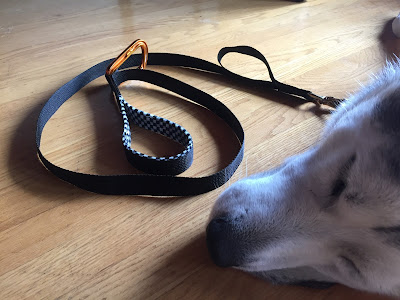 The boy is smitten. He sewed (yes, sewed!) Jaco a custom collar and leash. He made Jaco a 2 inch wide martingale collar that looks quite smashing on Jaco. I especially love the checkered pattern, making him either a racing dog or a dog who likes ska. 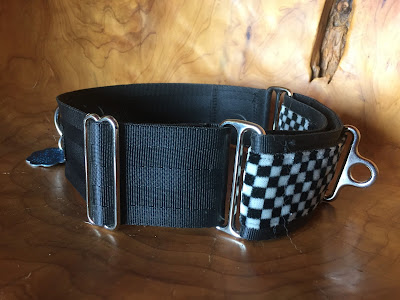 Isn't that collar great? I keep on thinking that a side gig making dog collars and knitting patterns would be a nice alternative income stream, but then the work involved always makes me reconsider.

Now, we're are back to wearing dog treat bags in public and Greaseball and Sesame are helping us train an untrained, 1.5-year-old malamute. The new twist is that since Jaco needs so much exercise and the boy is his primary caretaker, Jaco and the boy have walked to at least 6 breweries. Yes, they get their exercise by walking to breweries! This doesn't sound like a lot until you realize that we've only had Jaco for 2 weeks.  This is the first dog we've had who is good with random people and dogs approaching him and who has no trouble settling down in a public space, so my husband's excuse is that he wants to keep this dog socialized. My GSDs have always been the manners police, and Mingus, while good with people and dogs, wouldn't settle. So, this is a new thing for us. Brewery dog, it is! If you have a lead on good breweries in the Bay Area (the closer to Berkeley, the better), please don't be shy about letting me know in the comments.

Plucked from wildtomato at 8/28/2017 No comments: Links to this post