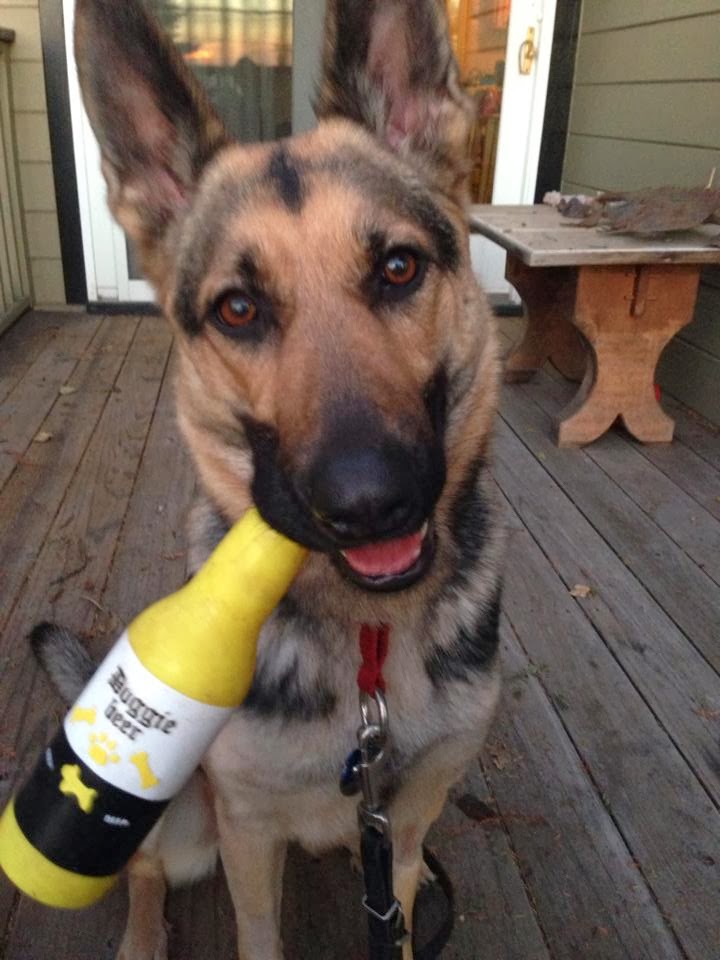 More details to follow, but the short story is that we're fostering (and hopefully adopting) this little girly dog. Mingus is smitten, the cats seem to not give a crap, and we are all adjusting to life with +1 dog.

Dialing in a new dog is so much work. I take for granted all the time we've put into Mingus until a guest dog comes along who is clueless. She's bright and eager to please, so at least the work is fun.
Plucked from wildtomato at 1/19/2014 4 comments: Links to this post

He Tries So Hard to Fit In 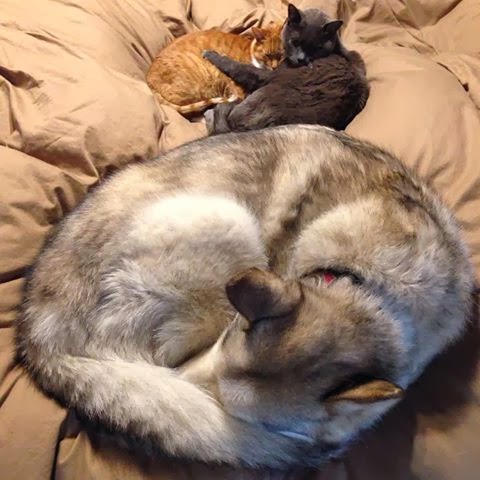 Sadly, Mingus, you are not a cat. Greaseball and Fifty can see you, even when you curl into a tight ball and squeeze your eyes shut.

Yes, the cats are cliquey. No, I don't feel sorry for you.

Although I often yearn for a substantial, unstructured stretch of time, I've come to the conclusion that unstructured time and me do not mix. So with 5 days to spend at home, the boy and I tackled some house projects and food projects that we've been meaning to do. I'll spare you pictures of the house project since most of it involved replacing some cabinets (2 cars and 2 trips to the furniture store to pick it all up), and clearing junk from the old cabinets so we're not storing the crap we haven't touched for the last 10 years.  However, there are plenty of food pictures. 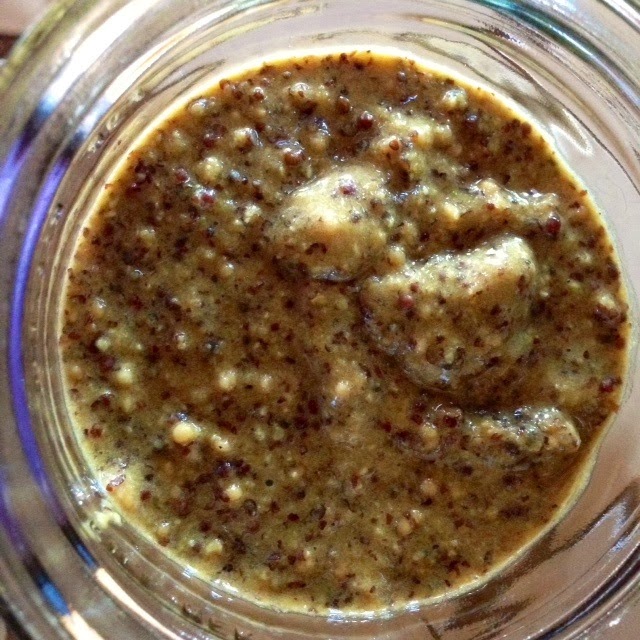 A side effect of brewing and bottling beer is that once in awhile, you'll end up with a flat bottle. Since it pains me to toss anything that resulted from so much work, we transformed a bottle of flat porter to honey mustard. Again, I used this recipe, but I added an extra 1/3 cup of black mustard seeds. The resulting mustard is thicker and spicier than my last attempt.

I also took over the mash for the chestnut beer that we recently brewed. After hounding the boy about his inefficient mashing methods and spouting off better ways I researched (but never tried) to hit the target gravity, he relinquished the role to me so I would stop. My main complaint was that he was "cheating" on achieving the target gravity by increasing the amount of grains instead of simply stirring the mash more. With my timer set to ding every 5 minutes, I stirred often and adjusted the heat. And guess what? This batch will hit target with the specified amount of grains so long as the yeast do their job and convert all that malty goodness to alcohol. This success does mean that I am locked into doing the mash, but it suits me and my OCD ways quite well. So long as I don't have to wash those giant pots, I am happy to help. It has crossed my mind that I was lured into doing this... 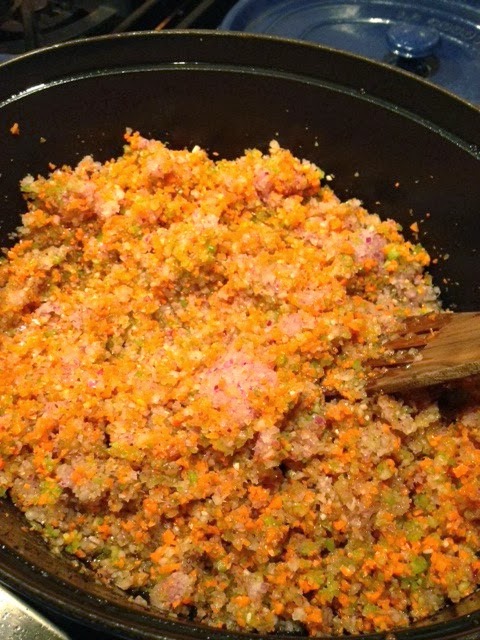 Have you read Cooked by Michael Pollan? My favorite part of the book were his private cooking lessons with Samin Nosrat, and I wanted to make her sugo recipe. Mincing 5 red onions, 3 stalks of celery, and 3 carrots was a job for a food processor, but since I just sharpened my knife, I tackled it by hand. Since I started the recipe, with everything already chopped, almost at midnight, I didn't roll into bed until 5 AM. It was about 2 AM when I started to wonder why I had to make the tomato paste from scratch. Still, the results were satisfying and I have enough meat sugo for at least 6 more dinners. 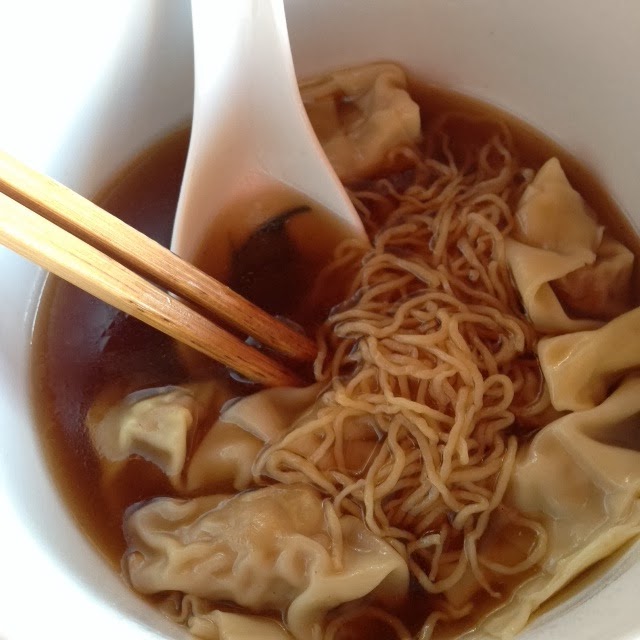 The boy and I also folded enough wontons to feed us for months. Admittedly, this could have gone faster if I remembered how to fold them, but once I made an emergency call to my mom, I got it sorted out. The tutorials I watched online were different from what I remembered doing as a child - I'll have to make a video of my mom folding since she is speedy. When coupled with the crab or turkey broth that I canned, wonton noodle soup can be mine in under 10 minutes.

We also cooked our first live crabs (horrifying to me, but not to him) and made a tasty vegan mac-and-cheeze. If you make the mac-and-cheese, you can use a neutral oil to make the roux instead of Earth Balance.

If you have foods that you make in bulk for quick, weekday meals, please share them with me in the comments. Bonus points if you link a recipe.
Plucked from wildtomato at 1/07/2014 5 comments: Links to this post

How do Californians with an aversion to cold have a white Christmas? We go to the beach, play in the ocean (stand up paddle boarding is quickly becoming my favorite water sport), and dig holes. 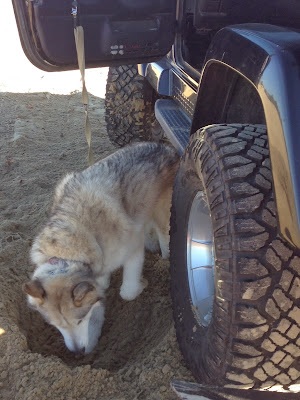 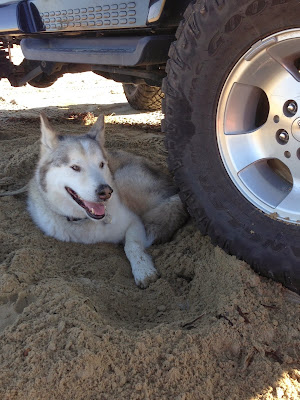 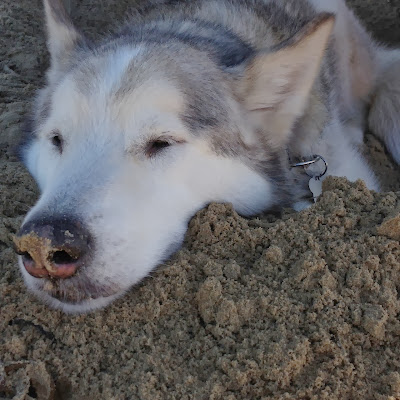 I love how he crafted himself a bed with a pillow. 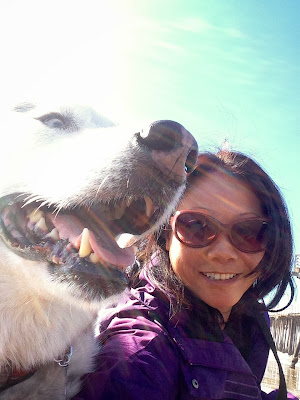