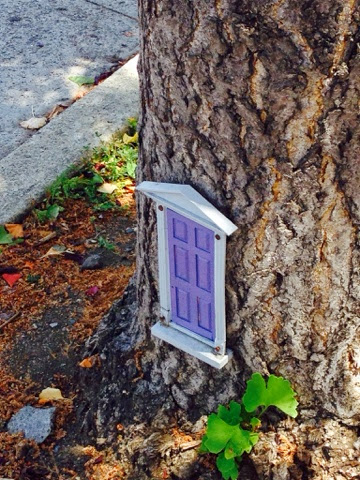 This tiny doorway appeared on a day I was determined not to let a chain of minor issues mess with my mood. I had a glorious day off, and I intended to squeeze as much as I could out of it by starting it with a morning yoga class. I arrived at the gym 15 minutes before the class, but I ended up circling the gym for 20 minutes trying to find a parking space.  (Later, I found out that the class I was interested in isn't scheduled to start until 2 weeks later, but I still could have bouldered at the gym.)

Ok, no yoga. Fine. Now, I told myself through clenched teeth, I can try out the boba from Asha Tea House since it's been on my list of "must-do's" for a few months. 20 minutes later, I park 1.5 miles away because I couldn't find a closer parking spot. Ok, no problem. I needed the walk anyway to compensate for the lack of mind-calming yoga, although now I'm feeling weird about walking about town in yoga clothes because I'm a poser. 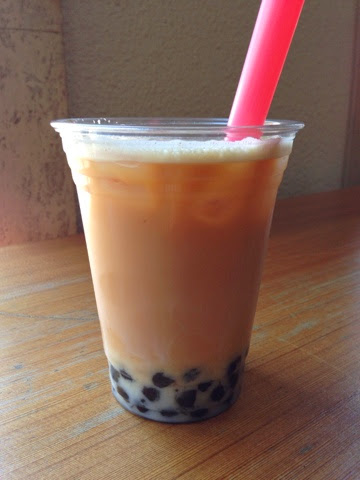 The boba was as perfect as I anticipated: they use freshly brewed tea, chewy boba boiled with sugar, and none of that non-dairy creamer crap. I had a slow walk back to the car. Only then did I notice that I parked next to a tiny door!

The moral of this story? I need to ride my bike or take the bus to town.
Plucked from wildtomato at 7/31/2014 2 comments: Links to this post

Email ThisBlogThis!Share to TwitterShare to FacebookShare to Pinterest
Labels: random 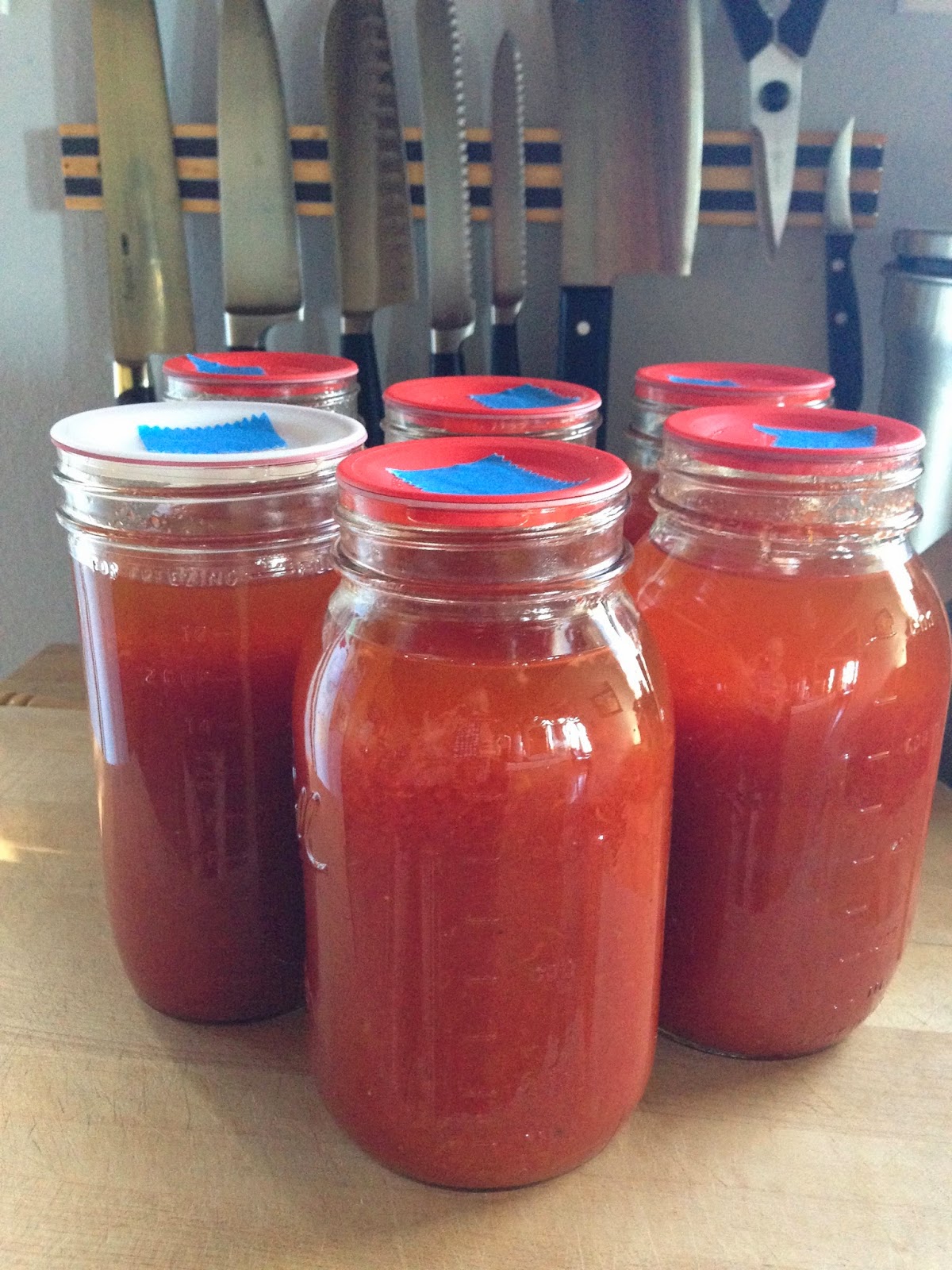 30-lb boxes of roma tomatoes are available now through my CSA, so tomato sauce season is here! This time, I timed each step to track the time I spend making and canning 5.75 quarts of tomato sauce. 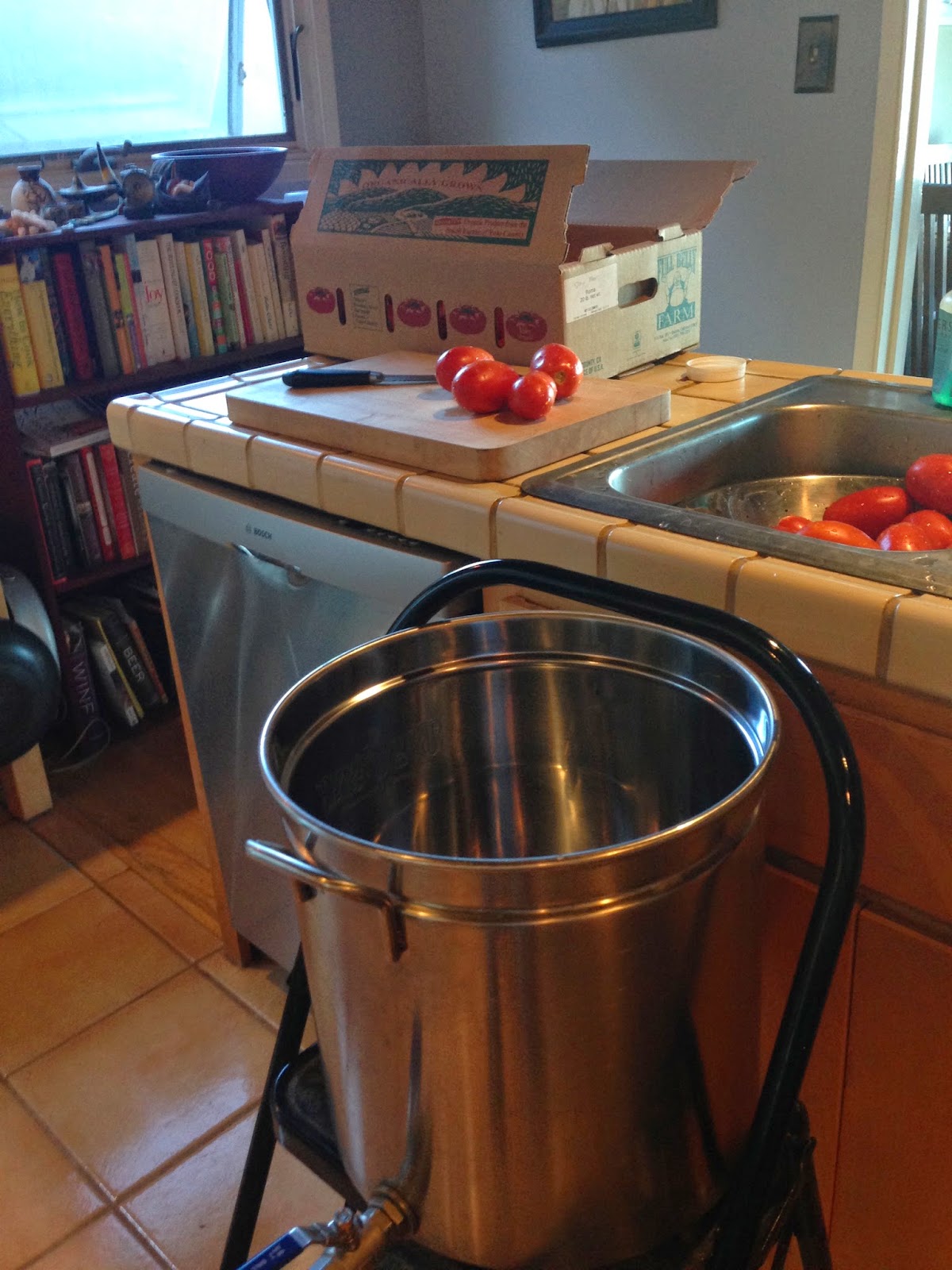 Chop 20-lbs of tomatoes and throw them into the giant beer pot. 15 minutes of active time. 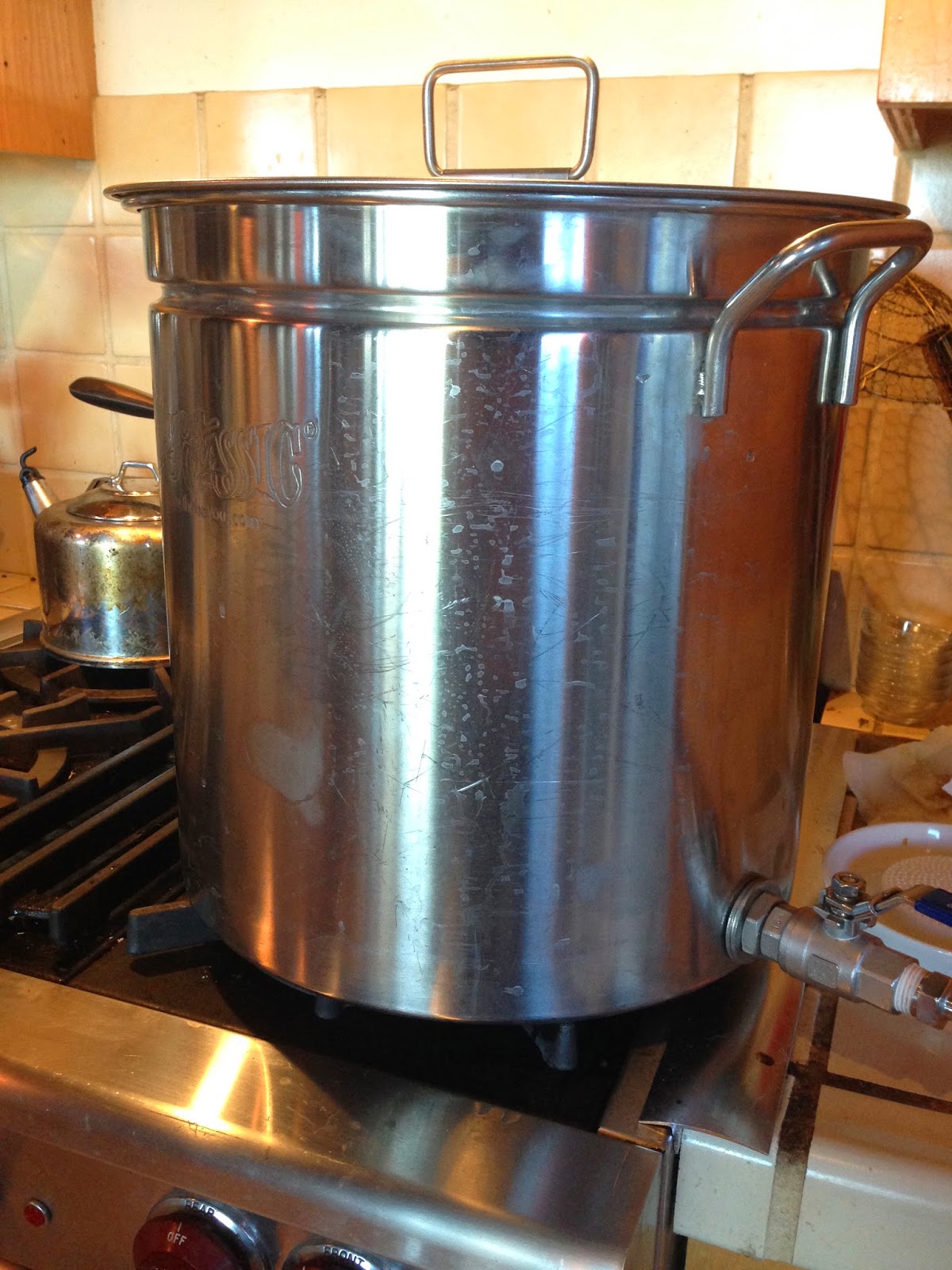 Simmer the tomatoes for an hour. There isn't anything for me to do except clean up the knife and cutting board and give the sauce a stir every 20 minutes or so. 5 minutes of active time. I used the boy's beer pot, which can probably hold 60-lbs of tomatoes. I contemplated making a double-batch, but it was cumbersome lifting the huge pot with the 20-lbs in it.

Since these pots are thin, I did burn some of the skins on the bottom of the pot, but luckily it wasn't enough to leave a scorched taste in the sauce. The other near accident was that I didn't close the spigot, but I noticed the tomato water coming out before if flooded the kitchen floor and fixed the problem. 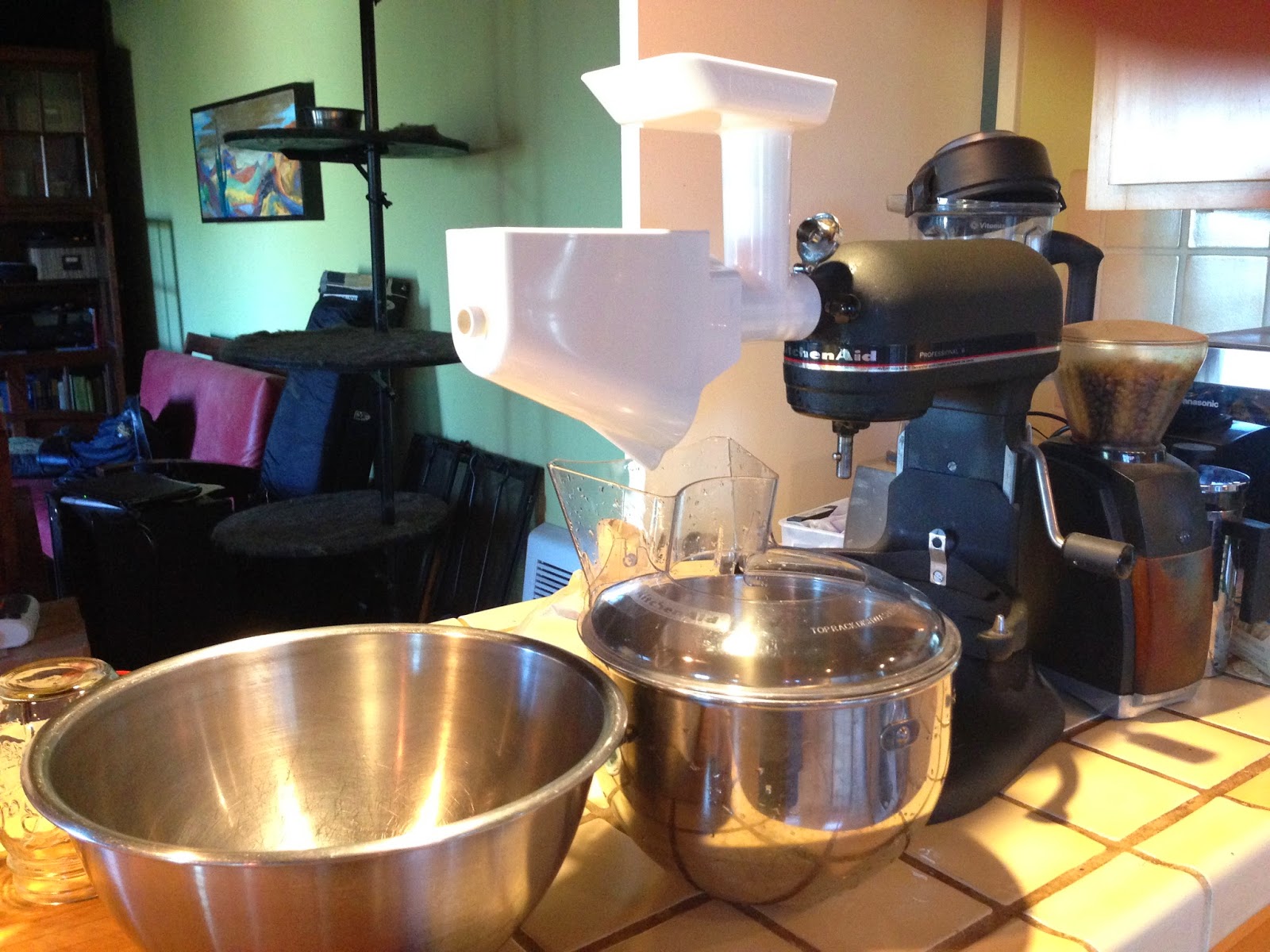 Strain the tomato seeds and the skin. Active time, including clean up, is 1 hour. Clearly, this is where I need to speed things up.

The final steps had very little active time: reduce the sauce for 1 hour, and pressure can the sauce (10 minutes of active time, and 1 hour for canner to finish).

5.75 quarts of sauce takes roughly 4.5 hours, and the majority of the active time was spent putting the chopped tomatoes through the food mill. Although I have mostly an automated set up, it still was annoying to operate the food mill for an hour, but it is much quicker than using a manual mill as I've done in the past. For my next batch, I'm going to try straining the through the food mill first, and then reducing the sauce.

Last year, I canned 140-lbs of sauce, and we only have a small bit left. This year, I want to can more quart jars since I used them up quickly last year for pasta sauce.  I had to ration them. Half pint jars were also a hit because they were the right amount for paella or a single serving of quick pasta sauce, but because I'm short on reusable lids, I'll probably can mostly pint jars.

Is it worth the time and the effort? It's something I ask myself every year because I feel a little crazy doing all this work, but I keep on doing it because I like the taste and I enjoy the process. Plus, I can reuse the jars and lids (Tattler lids really do work!) year after year, so I can give myself a green pat on the back.

I have closet space devoted to my canning efforts, and JarBoxes keep it all organized and secured. I'll need to buy more Tattler lids because now that I can more than tomatoes (chickpeas, black beans, and an assortment of stocks), I'm running low. I'm waiting until they have the red lids again because, well, red! However, I may have to cave in soon because I don't have enough for tomato season. 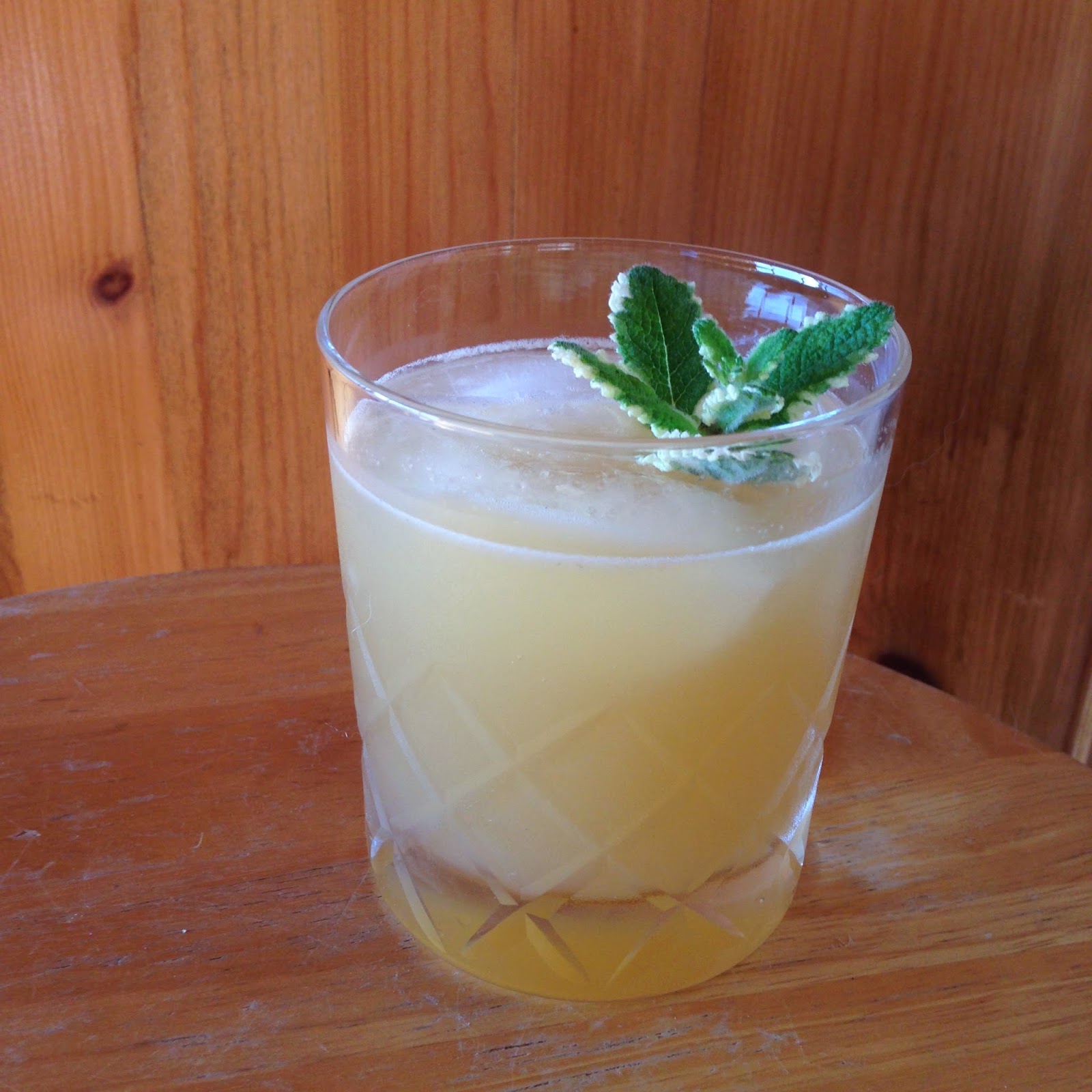 Post canning, I made myself a whiskey smash. And then I made another one. Meyer lemons, pineapple mint, rye, and gum syrup make a heavenly libation. Gum syrup isn't cheap ($1.40 per ounce) and I've gone through 1/4 of the bottle already, so that may be my next DIY project.

Have you seen the magnificent blog Confused Cats Against Feminism? I need to think of a clever caption for a Greaseball or Fifty photo so I can submit it.
Plucked from wildtomato at 7/27/2014 No comments: Links to this post