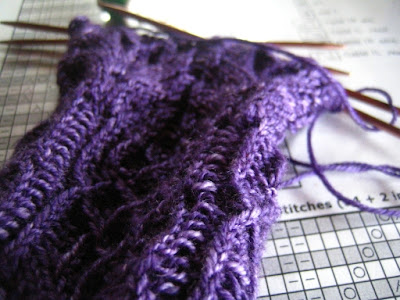 Can anyone guess this sock pattern? It's been my zen project - you know, the type of project you have to buckle down and give your undivided attention. No listening to podcasts, certainly no television watching, and no gabbing on the phone. Just knitting. This project was just crawling along until I figured out how to knit 1x1 cables without a cable needle. Also, I was fumbling with different circular knitting methods.

This project started out as magic loop because I only had one 32-inch circular needle that was the right size. It was an Addi Turbo lace needle, and as much as I love them, the cables were a bit too stiff for the magic loop method and I was getting huge ladders on the sides. Then, I got my second circular needle back that was the right size (it was on loan), and I did my trusty 2-circ needle method. This would have been ideal, except my two circular needles were insanely long and kept getting in my way. Off to the LYS I went with every intent of buying another Addi Turbo lace needle that was only 16-inches. However, the Kollage square knitting needles caught my attention, especially since they were 1/2 the price of the Addi Turbos.

Knitting on DPNs is not my favorite, but I've used them before and the novelty of knitting with square needles is keeping me interested. I did have a "duh" moment when I first switched the project to DPNs and I completely removed one double pointed needle from my project. And then I freaked out. And then I put the project in a time out until I could collect myself. However, now I've finally found my groove. Sock Summit is my project deadline, although I really hope I'm done before then.

To counteract my "must concentrate" sock pattern, I've been crocheting on my neverending afghan. It's one year and two days since I first started it, and 80 rows are complete. I'm probably 60% complete. My afghan's days as my go-to knit night project are probably limited because it's a little odd to bring a blanket with you to cafes and pubs, even if I am working on it. I'm beginning to see the appeal of modular blanket squares.

To make up for the lack of pics, I leave you with Imploring Fifty ("if you just open the front door and let me give the dog a quick shove, problem solved!") and a blurry side by side comparison of Fifty-Fifty and Greaseball. Fifty's probably average cat size, weighing in at 11 pounds. Greaseball, on the other hand, is a whopping 20+ pounds the last time I checked. He's a jabba! 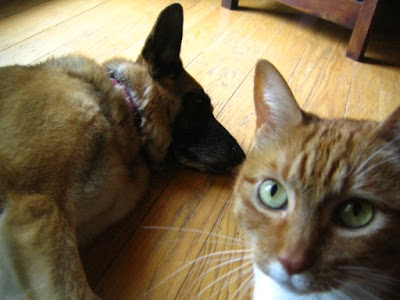 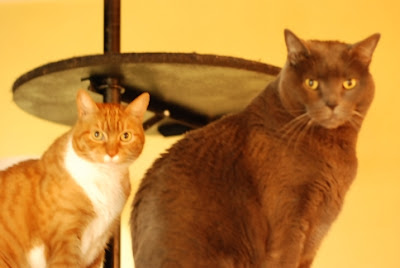 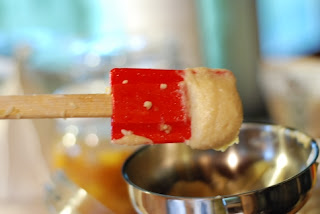 The sweet miso I started last month is finally done! Well, it's a little overdone, but more on that later. When I first opened the crock, it smelled strongly of sake, a logical smell since koji is used in sake production. 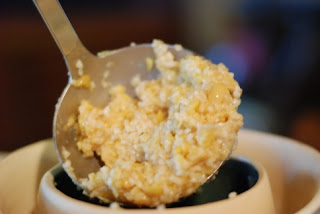 I spooned it into the food processor and let it whiz about until it was blended to a velvety smooth paste, about 3 minutes. 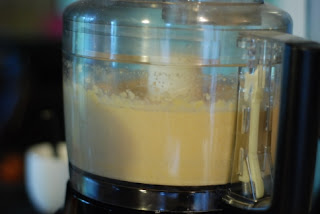 The end result was 5 cups of sweet miso. Due to the actual summer temperatures early on during the fermentation time, I think I could have pulled this miso out of the crock about a week earlier. I can taste lactic acid, one of the main acids that gives sauerkraut and sourdough bread their tang, in the miso. Still, I made a batch of miso soup with it, and it was very warm and comforting on this drizzly, gray day. I even got the boy to down a mug, without force, which was a surprise. He wasn't thrilled when I fed him a spoonful of plain miso paste earlier in the day, so the fact that he voluntarily drank that soup is a testament that it wasn't too sour.

I don't know if I'll be using this batch of miso for salad dressings, but I do think it will be a wonderful addition to marinades. Any additional thoughts on what to do with tangy miso?
Plucked from wildtomato at 5/17/2011 3 comments: Links to this post 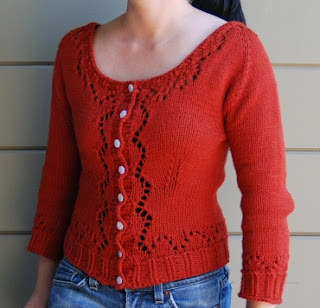 Another cardigan complete!  This is Miette by TheAndiPants, a free pattern on Ravelry. So far, I've knit 4 cardigans for myself in 2011(Aidez, Ocean Beach, Swingy Cardi) - I needed some more cardi action in my wardrobe. 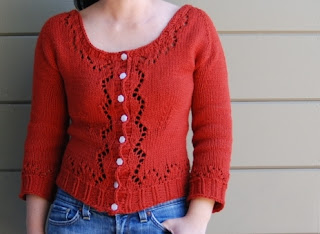 The yarn is Spud & Chloe Sweater, a 45% organic cotton and 55% superwash wool blend. Knitting with the yarn was more pleasant than ordinary cotton yarn due to elasticity of the wool, but the finished yarn does feel very much like cotton to me. And so far, it's stretching like cotton, too. Remember that if you knit with the stuff - add some negative ease!

I'm a shortie, so again many shortie-specific modifications were made. For the details, see my Rav project page. 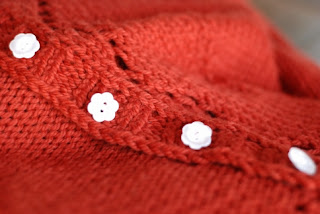 The flower buttons were a lucky find. The wall of buttons made my eyes cross at the craft store, and I almost missed them.

My next FO will hopefully be a pair of socks, the Twisted Flower by Cookie A. I need to finish up my sock stash before Sock Summit!
Plucked from wildtomato at 5/09/2011 4 comments: Links to this post 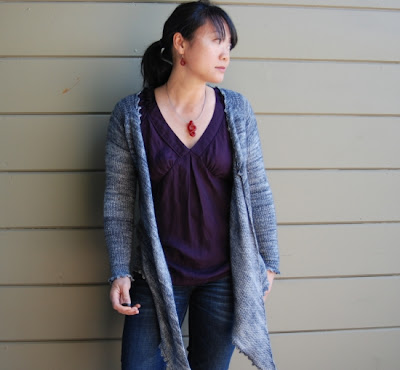 Being less than five-feet tall makes it hard to find clothes that fit right, especially when the style I'm after is a cardigan that's long in the front and short in the back. (It's a reverse mullet cardi!) So, what's a knitter to do? She makes one herself! 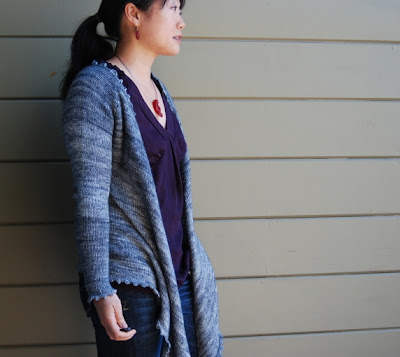 I added picot trim to the sleeves and the bottom of the cardigan, 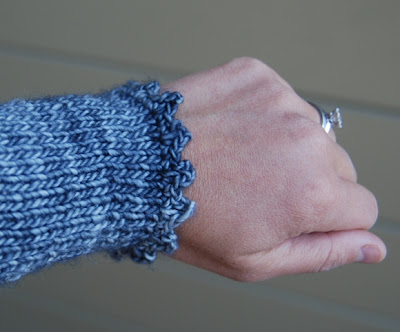 and I added some scalloped edging to the neck. 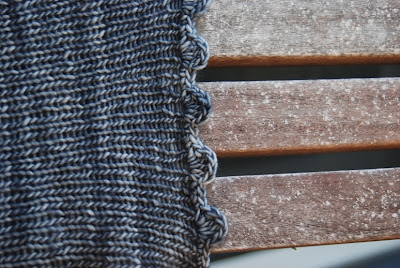 Madeline Tosh DK is so smooth and soft. I had reservations about knitting with a single-ply superwash yarn, but those reservations melted away with each stitch I knit. MadTosh is a pricey yarn, but I was lucky that it was 20% off at Article Pract (it was a staff pick). 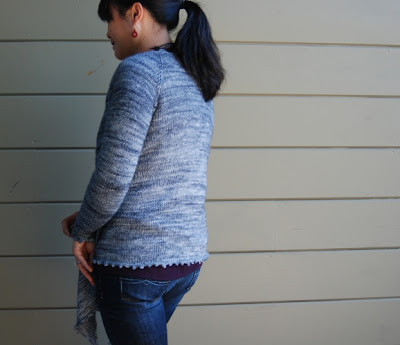 Speaking of yarn stores, my all time favorite store is no longer. Stash Yarn, you were the best! I am going to miss you.

More details on the cardi can be found on my Rav project entry. Perhaps I'll write this pattern up, too.

Anyone going to Sock Summit in Portland? I'll be there attending the marketplace and hopefully the Sock Hop! My train ticket and hotel are booked, so now I can concentrate on what I'll eat and where I'll visit. A friend works at the Omsi, so that's on the list, and I've love to do some kayaking, hiking, and yarn shopping.  All recommendations are welcome and appreciated.
Plucked from wildtomato at 5/04/2011 4 comments: Links to this post 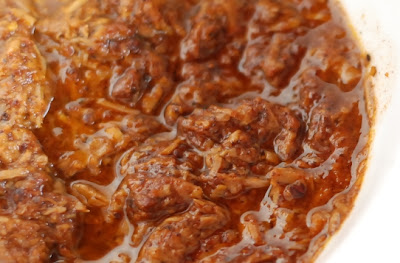 Inspired by an episode of "Mexico - One Plate At a Time," an episode that features Rick Bayless and his daughter Lanie digging a pig pit in their backyard (so jealous!), I made a crockpot version of the featured dish: cochinita pibil. Years ago when we went to Merida, the capital of Mexican state Yucatan, cochinita pibil was featured on every menu and I made sure to sample it every time. I am a sucker for a good, slow cooked hog.
An aside, during the TV show, Lanie says, "Speaking of hot, let’s see what my dad is up to outside." The show cuts to a clip of Bayless in a skimpy tank top, muscles rippling as he digs a hole. Before I could turn to the boy and protest, he said "She means he's temperature hot." Who edits this show??? Did anyone else see this episode and have to do a double-take?
Even more of an aside, we had some friends for dinner when the boy made cochinita pibil a couple of weeks ago, and one friend mentioned that Rick Bayless is the kind of guy he expects to see in a dungeon clad in leather. Hm, food for thought.
I had some annatto leftover from who knows what, so into the blender it went with some lemon juice, garlic cloves, and salt. Have I told you how much I love my blender on steroids? Not only can it do demure tasks like make smoothies, but it can grind spices and purportedly grind wheat berries for flour. That's my next experiment! 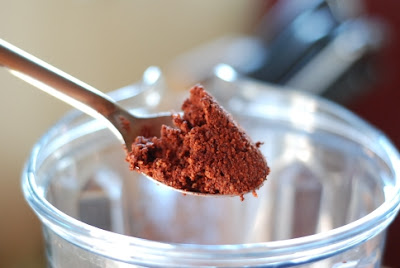 This spice paste was rubbed over a luscious pork shoulder from Marin Sun Farms, then the pork shoulder was wrapped in banana leaves and thrown into the slow cooker over low heat. I added a scant amount of water to the bottom of the crock to ensure that the leaves didn't burn before the pork started to release its juices. After 6 hours passed, I removed the banana leaves and the bone, and used two forks to shred the pork. The shredded pork went back into the slow cooker to simmer over low heat for another hour with all of the juices. 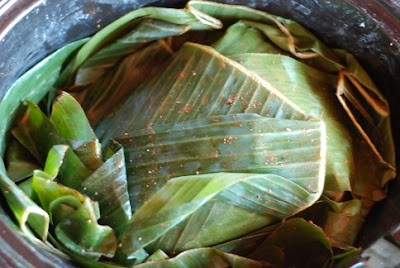 To accompany the cochinita pibil, I made the traditional side dish of pickled red onions. The boy first made this a couple of weeks ago, and even a life long raw onion hater (me!) liked it. If you want to make some yourself, thinly slice red onions, pour boiling water over the onions and let them sit for a few minutes. Then, rinse them in cold water. Once rinsed, cover the onions with lemon or lime juice and add a heaping spoonful of salt. In about an hour, you have really pink pickles that go well with any rich meat dish. 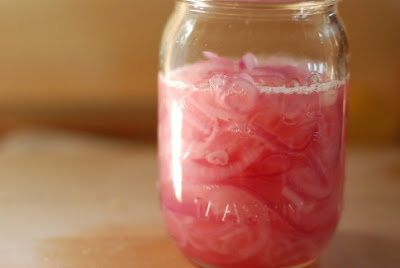 I've been checking up on my food experiments daily.  The Indian lemon pickles have multiplied - I put up another jar of the stuff because it smells so good. When I can, I sit the jars out to cook in the sun. The miso smells like sake and is bubbling away, the infused vodka is taking on a golden hue, and the preserved lemons are probably done now and I should figure out what to do with them.
Plucked from wildtomato at 5/03/2011 7 comments: Links to this post