What cat doesn't need a fez? 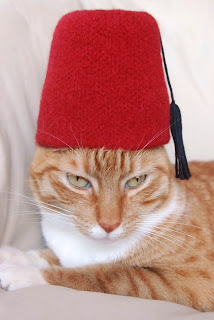 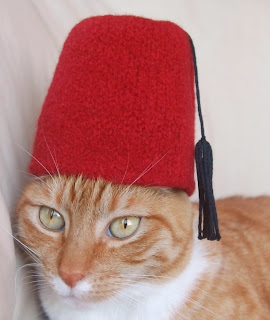 This hat is knitted from the top down. Admittedly, it is tricky to start this hat because 1 stitch is knitted back into itself to create 8 stitches, so remember to cast on that first slip knot loosely.

Don't forget to check out my other free patterns listed on the sidebar!

Materials
• 80 yards of worsted weight feltable (non superwash) wool for the hat. I used Cascade 220.
• 1 yard of DK or worsted weight black yarn for the tassel. I used Tahki Cotton Classic because it is in my stash.
• 2 US size 10.5 circular needles, any length, OR size needed to achieve gauge. US size 10.5 DPNs may also be used instead of 2 circular needles
• 6 stitch markers
• Pint glass (yes, really!)
• Row counter
• Tapestry needle

Special Skills Needed
• Knitting in the round
• Making a tassel
• Felting

Abbreviations
[ ] repeat instructions between brackets
bo bind off
co cast on
k knit
kfb knit through the front loop without dropping the stitch from the needle, and then knit through the back loop and drop the stitch
M1 make one stitch
p purl
pm place marker
rm remove marker
rnd round(s)
sts stitch(es)

** Alternatively, loosely CO 4 sts onto one needle and kfb 4 times. This will result in a bigger hole up at the top after felting.

Finishing
Weave in all ends. Felt hat using your preferred method until it shrinks enough to fit your cat's head. I highly suggest that you jot down your cat's head diameter ahead of time and that you don't try the wet fez on your cat. If you do, I am not responsible for your cat's actions. To dry the hat, I found that an upside down pint glass was the perfect shape fez shape. If your cat hat deviates enough from the pint glass that it won't work to hold its shape, cut out cardboard to line the bottom and sides, then stuff the hat cavity with plastic bags. 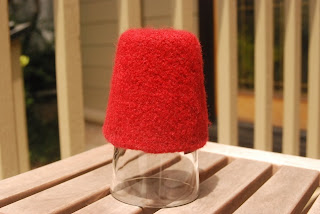 Once the hat is dry, make a tassel and weave it into the center of the hat.

If you make this, as always, I'd love to hear from you and see your fezzed up cat!

This work is licensed under a Creative Commons License.
Plucked from wildtomato at 6/10/2008