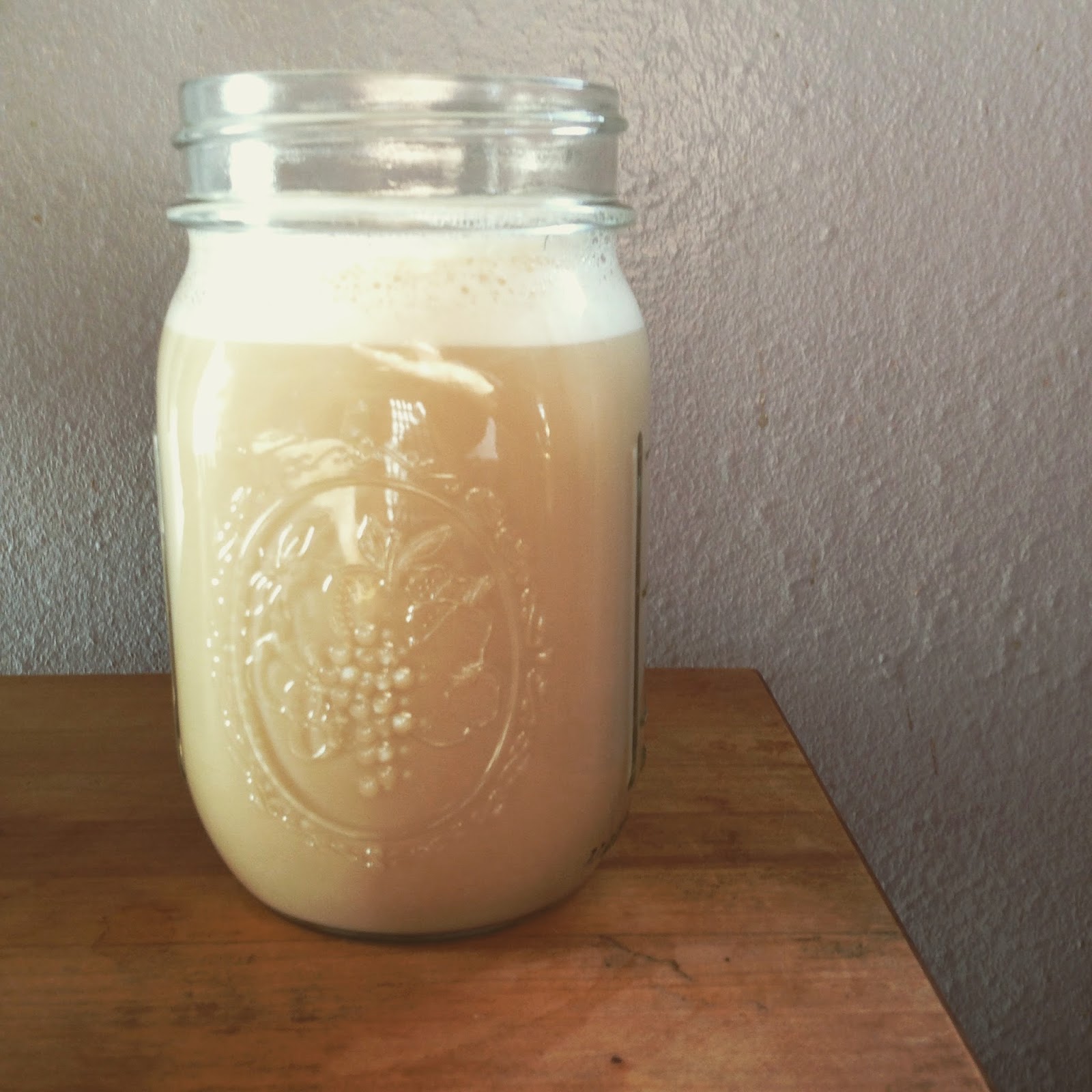 Soy milk, especially when it's  hot with just a hint of sugar, is my comfort drink. The stuff you buy from cartons is marginal and they are usually flavored and thickened. Any decent Chinese market sells fresh, and sometimes hot, soy milk from a plastic jugs, but it is still not ideal because of that plastic jug (landfill!) and because it isn't organic.

I've thought about buying a soy milk maker before, but it's such a specific machine and it would take up a lot of precious space. What if I could use what I already have, specifically my super duper Vitmix blender? Pickiness, not necessity, is the mother of invention in my world.

A little research showed that this has been done (and there's one baffling website where someone makes soy milk while wearing a bikini), and after a few tweaks, I made fresh, hot soy milk that tastes just like the stuff I love at Chinese breakfast restaurants. The best part is that if you have dried soy beans handy, you can make it in less than 10 minutes from start to finish. Even better, there isn't a pot of soybeans you have to watch and stir, you don't have to remember to soak your beans overnight, and there is no straining. 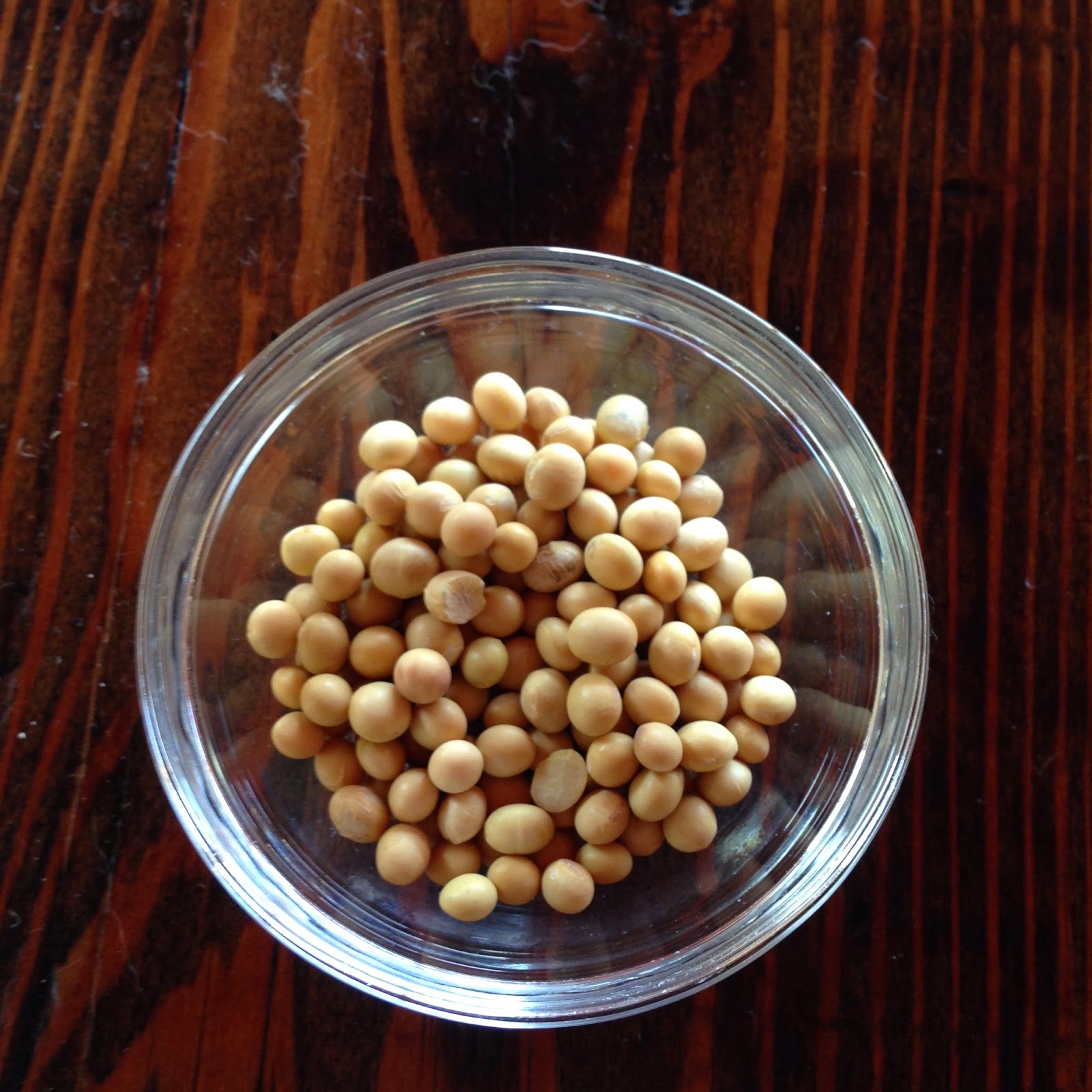 Start by boiling two cups of water. While the water is boiling, measure out 1-ounce of dried soybeans. Combine the boiling water and the soybeans into a Vitamix and mix on HIGH for 6 minutes (start the blender at 1, ramp it up to 10, and then flip the HIGH button). If you want to sweeten the soy milk, add your sweetener and blend for another 10 seconds. I added 2 tablespoons of dark brown sugar to my soy milk, but I've also added maple syrup or just plain cane sugar. I've also added a pinch of salt, which is also very good.

Although the temptation will be to make more than 2 cups at a time, don't do it! The soy milk foams up as it blends, and there is plenty of clearance to prevent it from foaming over and out of your blender when you only do 2 cups at a time. Also, starting with boiling water is key since you want to cook the soybeans - I tried with hot water from the sink, and the resulting milk was disgusting because it still tasted like raw beans.

If you don't have a Vitamix, any blender on steroids will do, like a Blendtech.

I love when I can figure out a way to make something I usually buy, and it is way easier than I anticipated. I've made soy milk the old fashioned way (soak beans, blend beans with water, strain, and cook the milk), and it was a mess and not worth the effort. However, I can boil water and weigh beans just fine, thankyouverymuch. 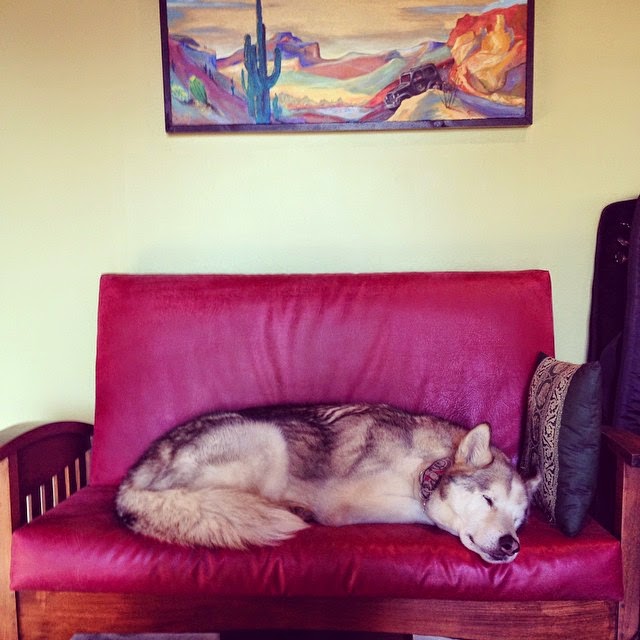 I hope everyone had a lovely holiday season and that 2015 is the best year yet! This year, instead of driving all over during the holidays, we stayed put. I wish I could report that we did wonderfully fun things like take an exotic vacation somewhere warm or kayak all over the bay, but we chose (and some of us grudgingly) to tackle some home improvement projects.

First up was managing our pesky kitchen pantry. That stupid Japanese tidy book convinced me that we lived in a hovel more so than watching a Hoarders marathon. The boy didn't know what hit him. Since we had company over, the house was clean, but I argued that our house was skinny fat. Just because it looked good on first glance, didn't mean that there weren't disgusting things behind closet and pantry doors. Faster than he could ask me to define skinny fat (a horrible term that implies skinnier people look better - so not true), he was installing new pantry drawers and I had dumped old flours, seasonings, and sauces. Now our two-feet deep pantry shelves are transformed into usable drawers where hopefully nothing will be forgotten due to never seeing the light of day. This was a much easier task, from my perspective at least, than weeding through our clothes, and I felt emboldened to continue tidying our closets and office room. 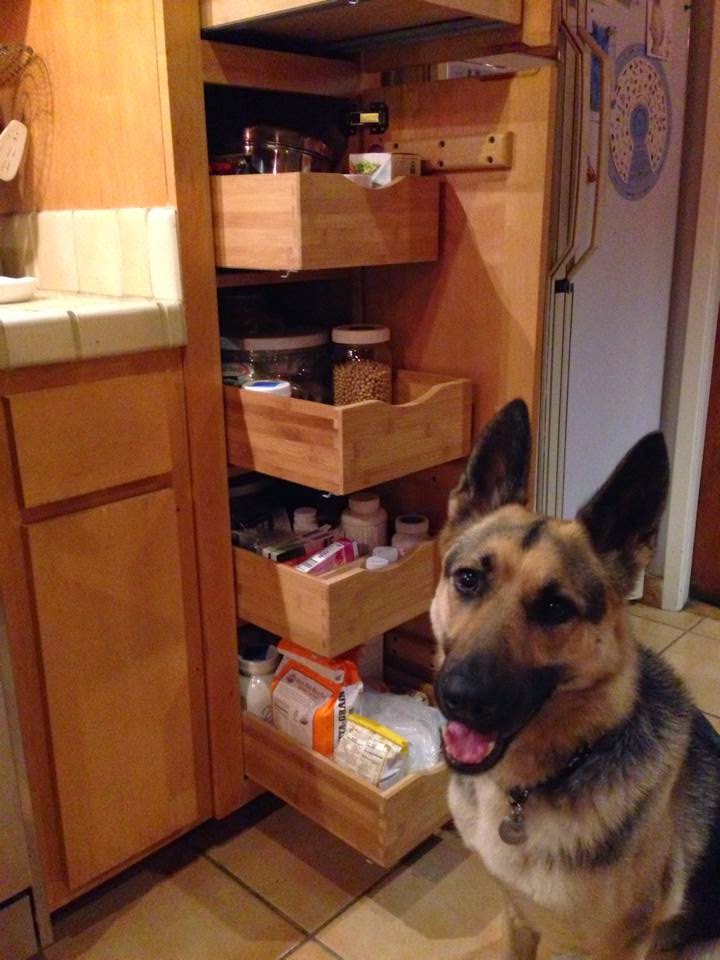 Several trips were made to the El Cerrito Recycling Center + Environmental Resource Center, the most wonderful place in the world for someone wanting to declutter with less guilt. I got rid of old office supplies, old clothes, electronic waste, kitchen tools that were redundant or not my style, and random memorabilia that had no place in the house anymore.

For those of you who live in the East Bay, East Bay Humane Society accepts donations of clean, used bedding and towels (and they are also walking distance to The Rare Barrel if you want to make an afternoon of it). Figuring out where to take used bedding instead of throwing it out was the hardest challenge. We had a ton of sheets that were ratty due to dogs and cats having claws. Out they went for a second life!

I even went through old photos and purged ones that were awful. Remember when you had to get film developed? You would end up with perhaps two good photos from an event, and 20 blurry photos. To add to the clutter, every photo developer offered 2 for 1 deals, so you'd get 40 blurry photos. So, yeah, although I initially thought it would be hard to throw away things that may have sentimental value, it wasn't hard to whittle down our photo collection and keep the photos that were truly precious.

The same went for old letters. I had saved old holiday and birthday cards and letters from friends, again these mostly were back in the olden days before email and Facebook. These items have served their purpose, although I did save a handful that I can use for blackmail. 20 years later, I do not need to know that my friend went to Costco or had coffee at so-and-so cafe. It's funny the things we hang on to thinking they have so much meaning.

The tidying process also gave me a chance to unearth WIPs that needed finishing. I blocked and finished my Henslow shawl, a Wildcat Canyon scarf, and a ripple afghan that took me 4 years to complete!

I even had a chance to crochet some cool hot pads (Starburst Hot Pad), and I neglected to make one for myself. Once I finish some more tasks, I need to make myself a couple of them for the table.


In the office room, I had a box of vintage canning jars my MIL gave me. Among the odds and ends, for the box was full of lids jars that did not always match, I found a matching set of Triomphe canning jars in great condition. Fortunately, I had new gaskets laying around for them since Fido jars also use the same sided lids. Ta-dah!


We also had time to experiment a bit with food and drink. The boy had picked our backyard plums last year and turned it into wine. We were skeptical that it would be something quaffable, and to our surprise, it was more than quaffable. It is delicious and it will be a good substitute for the gewürztraminers and edelzwickers I like to pair with spicy foods! So far, it's been aging for 6 months. I think it will be better in a few more months to smooth out the rough edges, but I'm happy with the finished product. 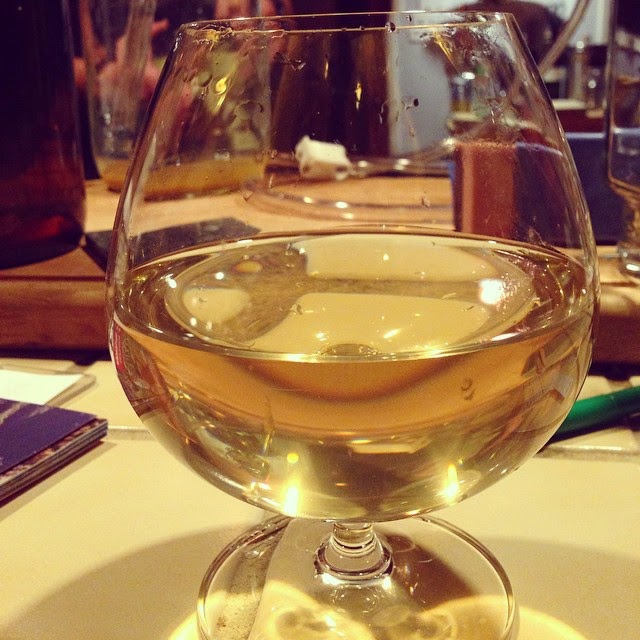 We also had a chance to play more with the extruded pasta press, this time making bucatini to pair with the last of our 2013 season tomato sauce. Man, that thing is fun! Expect to see more pasta posts soon. 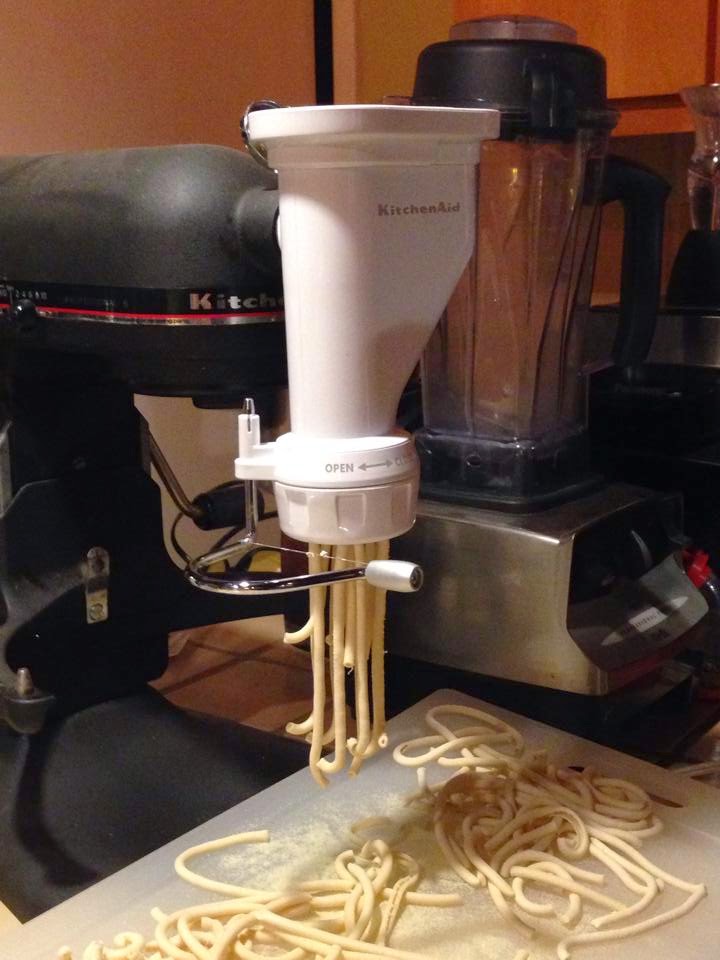