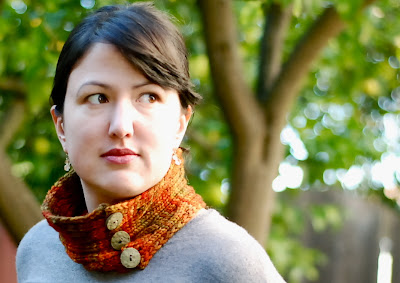 Although they only span 50-miles inland and range from Southern Oregon to Central California, coastal redwoods dominate the landscape and imagination. The Coastal Redwood Cowl’s lush texture reflects this tree’s strength and beauty. 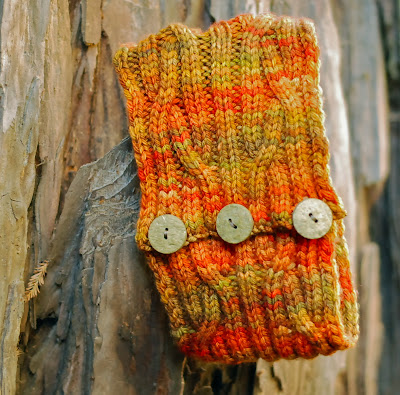 The pattern’s directions are both written and charted. Also included are instructions for special stitches and the sewn bind off. 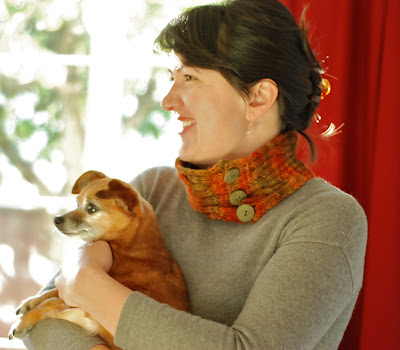 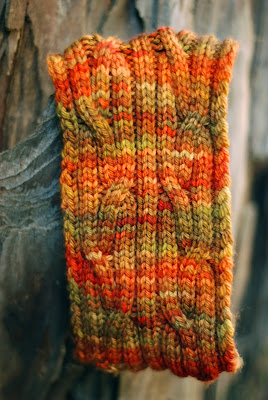 Finished measurements are 6” wide by 20” long. 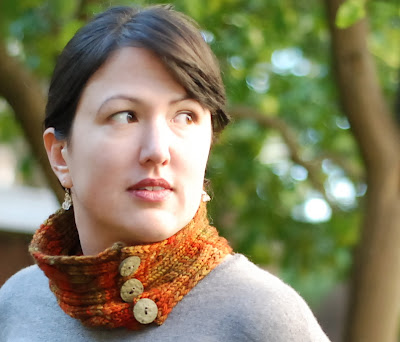 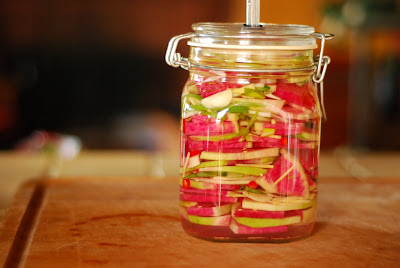 Happy 2013, everyone! Lots of experimentation has been going on in these parts, and most of them have to do with food. Of course. I made a beautiful watermelon radish water kimchi, a lightly fermented kimchi that only sits out for a day or two before going into the refrigerator. You eat both the radish and you drink the brine, but I am loving the way this full jar looks on my countertop. I had watermelon kimchi at FuseBox in West Oakland, and since my CSA box is full of radishes, I decided to attempt this kimchi myself.  There's a crock full of cabbage kimchi bubbling away, too, and it will probably go fast because anything spicy is in high demand during our (relatively) cold winter. (I know you snow folks laugh, but a high of 52 degrees F? Brrrrrrrr! This is the Bay Area - I didn't sign up for that!) 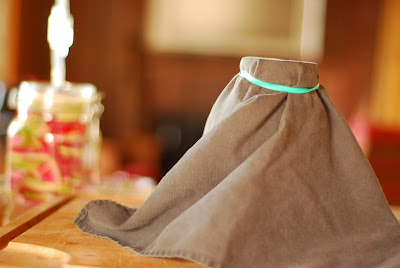 Sitting next to my kimchi is what I lovingly refer to as my Kitchen Sheik. It's the start of a kombucha SCOBY (symbiotic culture of bacteria and yeast - sounds appetizing, eh?). I was drinking one of those $3 bottles of raw kombucha when I got really irritated that just paid $3 for something that I could make myself. My mom and grandmother used to make kombucha, and I kid you not, but it started to turn my mother's hair black again! Although this is not why I like it, I find the tangy taste addictive, I wouldn't mind it if  my gray hair ceased to exist. So I dumped half of my kombucha drink into some cooled jasmine tea. It's almost been a week, and it smells right. I'll have to add some more tea and sugar to feed it so it can grow stronger. 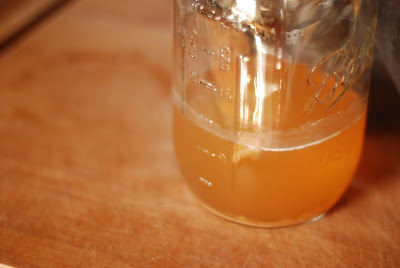 I wonder if my taste for kombucha has to do with the yoga DVDs I've been using? Or is this like Cabbage Patch Kids, where at first I think they're ugly, but then because all the cool kids have it I want one too?

An interesting side note is that there is kombucha beer from Unity Vibration in Michigan. I've had the ginger beer, gluten free by the way, twice! Both times, it hit the spot. It's a good beer to pair with Asian food, especially spicy food. 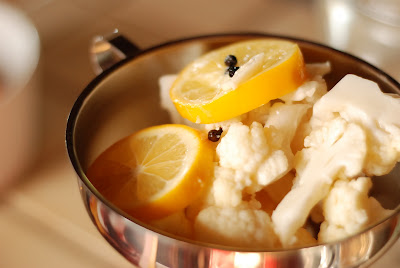 Since all my fermentation projects take weeks, I made some lemon cauliflower pickles (recipe here) for some instant gratification. They're lemony, pickley, and crisp! 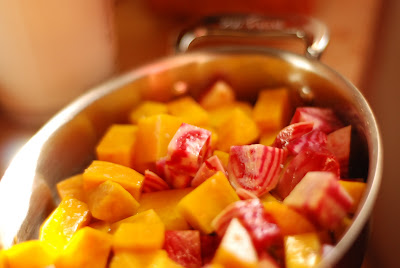 Beet roasting was also on today's agenda. There's nothing revolutionary here, but I do love the chioggia beet's style.

We have so much beer brewing here it is ridiculous. By the end of today, we will have 20-gallons of beer in carboys. 2 of those carboys are going to be tied up for a year since the boy is experimenting with sour beers. The other 2 carboys house a black lager and a Stone 12.12.12. Stone brewery is awesome in that they post their special beer recipes for free, so when we were wowed by a glass of 12.12.12 on draft, we immediately bought the ingredients and made some for ourselves. I think our version is going to taste more like cloves, so it will be a winter beer.

I have developed a perplexing craving for red meat, specifically burgers. Could it be the Cabbage Patch effect again since gourmet burger joints are the food media's darling? I've dragged the boy to burgers at the FiveTen truck, Elevation 66, Hopscotch, Burger Bar, True Burger, and Eureka! Burger.  I also had a kick ass hanger steak (they didn't even ask me how I wanted it - it came out deliciously rare) at Mill Valley Beerworks. Since I've been traditionally a lean meat and veggie person, I worry that I have a brain tumor because it's such a radical shift from what I normally crave. If I start becoming good at picking up different languages and I have a sudden love of raw onions, I'll know something bad is up.
Plucked from wildtomato at 1/13/2013 1 comment: Links to this post