I was convinced that I would never knit, simply being content to spin, and eventually dye, chiengora. I reasoned that I could trade conventional handspun yarn, like wool, with someone who could knit a scarf out of the Mingus yarn. Plus, formerly repressed memories of someone forcing me to knit hundreds of jingle bells for Christmas present decorations were surfacing (my mother must have taught me how to knit at some point, but I am too traumatized by being a jingle bell slave laborer to remember any details).

I now present my first nice swatch of Mingus: 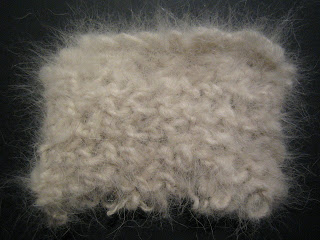 As you can tell, I was learning how to both knit and spin at the same time. The resulting product wasn't pretty, but it gave me hope.

A few days after I learned to spin, I had a week long vacation. My knitting needles and the cheap acrylic yarn I picked up at the drugstore had some serious bonding time. While lounging on the beach sipping margaritas, I knit my beloved cat Greaseball a scarf. As you can tell, he was just thrilled. Upon returning back home, I was on a scarf mission. Not even Vespa, my GSD, was spared. The top scarf is a simple garter stitch scarf made from Di.Ve. The bottom scarf is a Classic Elite La Gran mohair in lupine. The stitch pattern is from knitlist. 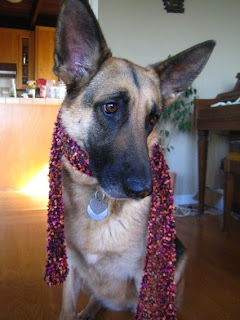 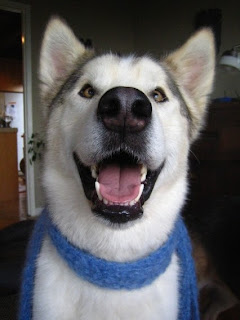 Now, I am hopelessly hooked on knitting since there seems to be an endless variety of things to learn that do not involve jingle bells. Knitting in the round, like hats and socks, is my latest obsession.

I like to call this picture Mingus on Mingus. That little white stripe at the top is some Mingus yarn. The rest of the yarn is Rowan Cashsoft and the pattern is halfdome. 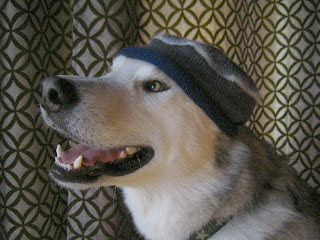 I am slowly working on the Mingus scarf - the process of collecting, spinning, washing, and eventually knitting the yarn takes a long time. Since I am a one who craves instant gratification, my needles are always have something I'm making with store-bought yarn. However, I will finish this in time for the boy's Christmas gift. There is a slight yarn malfunction in the middle of this project, but I think I'll be able to fix it later. So here it is: The Mingus Scarf. 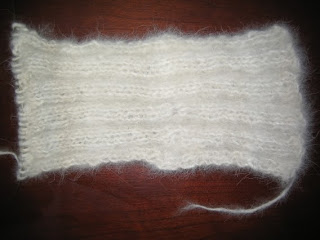