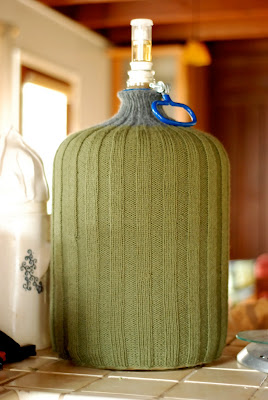 For the boy's birthday, I wanted to make his 6.5-gallon carboy a sweater of its very own. Since light exposure can lead to skunky beer, he had been wrapping his carboys in dog towels. While this practice wouldn't bother me that much if his beers were brewing in the back room, the fact that he insists on fermenting on our kitchen counter, where it was the first thing I'd see upon entering the house, started to wear me down. So, I guess you could say that I also knit this for myself. 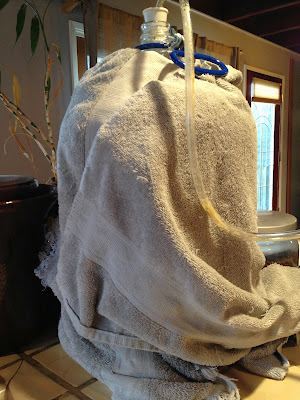 See that blowdown tube in the above picture? That tube saves marriages. Seriously. It still makes me livid to repeat the stories (yes, plural), so just trust me on this one.

I decided to knit the sweater in 4x4 ribbing in a tight gauge, and I did want something that looked, well, classic. More Pottery Barn than CB2. It's hard to not think of yourself as a little odd when you're designing a classic sweater for a carboy, but I am pleased with the final result! 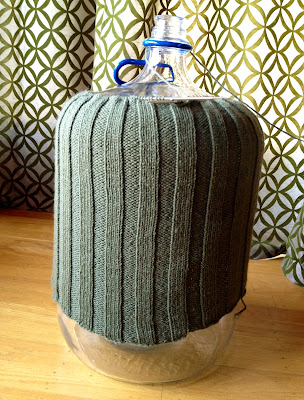 In the end, it was all knit out of leftover Wool-Ease I had purchased for a blanket (almost done, although I keep saying that!). There were several times during this process where I resented the carboy sweater because it was more knitting than I would have to do for a sweater for myself. Yet, it was the perfect project for that time because it was fairly mindless after a few easy calculations and gauge swatches. I knit it bottom up, but the next one I do will be top down. Although this is a ribbed sweater and it can fit both the 6.5- and the 5-gallon carboy, I do want to knit another one since the other carboy we have in the house is sitting in a cardboard box. Sour beers age for about a year, and I've been staring at that box in the corner of our living room way too long. If I don't knit it a sweater, I'm going to insist that the boy makes it into some sort of coffee table so that space isn't wasted.
Plucked from wildtomato at 6/06/2013