I Left My Stomach in NYC

Being in a place with good food makes me wish I could pack an extra stomach or three with me. My stomach completely thwarted my attempts to have a banner eating day of cheap eats on my last full day in NYC. I was going to start with a bagel with lox, have a slice of thin crust pizza, go to a rice pudding bar, consume cupcakes, and have a pastrami on rye. I ended up 2 for 5. It didn't help that I had to eat an emergency BLT, which was mediocre, because my blood sugar was crashing down and I was going to transform into a raging bitch if I didn't eat something NOW. (There was a long lag time, filled with walking, between the first and second meals - logistical error.) 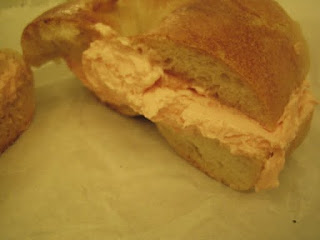 I did start my day off with a bagel from Ess-a-Bagel. The line was long, and the guy taking my order alternated between flirtatious and insulting. "Hi, Pumpkin! Want a drink? A drink with me after work? You don't want your lox spread with tomatoes and onions? Why bother! You shouldn't even get lox!" He also made me repeat my order several times, and he claimed that I spoke too fast, too loud, too soft, and he made the guy next to me move over a foot so he could see me better because he said he needed to read my lips. I suppose it is all part of the experience here.

Thankfully, after all that, my bagel with lox schmear was fantastic! In hindsight, however, I should have ordered what my friend got: a bagel with Nova lox, cream cheese, and a tomato. We learned that day that Nova lox, short for Nova Scotia lox, is a lot less salty than the regular lox. 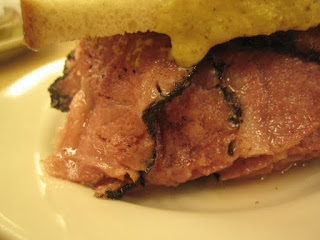 My other tourist food trap, a trap that I would willingly walk into over and over again, was Katz's Delicatessen. Remember "When Harry Met Sally" and Sally is sitting in a deli really (ahem) enjoying her food? Yeah, that scene. Well, that was here. The pastrami here was a revelation. Before Katz, my idea of a good pastrami sandwich had thinly sliced pastrami from a hunk of meat that was probably wrapped in plastic. No more! The hunks of meat on my sandwich were juicy with crisped bits and studded with chunks of black pepper, and they were cut in front of me from a brisket that was still steaming. I am so making pastrami at home because the stuff I can get at the store is a mere shadow of what I ate at Katz. 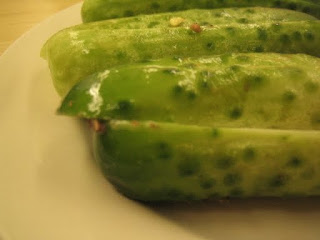 Also, half sour pickles were a revelation. They were lightly brined, reminiscent of the cucumbers you get at any decent Korean BBQ restaurant. A little recipe sleuthing showed that they're made just like regular refrigerator pickles, but you take them out only after a week versus the 4-6 weeks for full sour pickles.

I also frequented a couple of fancy NYC eateries: Eleven Madison Park and Aquavit. Eleven Madison Park was like going to a spa and getting the full treatment. Not only was the food mind blowing, but the experience was sumptuous due to the attention to detail. My favorite example of this is that when I sat down on the bench seat, the hostess pushed the table towards me so I would be the perfect distance away from the table so I would not have to perch at the end of my seat like a little kid. Unfortunately, I didn't take any food pictures since I was enjoying myself far too much and didn't want to break the flow. However, this article sums up my experience well, compete with pictures. My main course was a suckling pig, and I agree that the chef, Daniel Humm, is a pig whisperer.

The most striking difference between the high end eateries in San Francisco/Bay Area (at least the ones I've been to) and NYC is that SF focuses on local ingredients. High end NYC restaurants get the best from all over the world, while SF focuses on ingredients within a 150-mile radius, give or take a few miles. The reasoning behind the 150-mile food radius is that the best ingredients are going to be the ones that are the freshest, and the freshest ingredients are the ones farmed naturally in your own "backyard". There is also a whole environmental aspect to SF's food scene that I am glossing over, which is explained well in The Omnivore's Dilemma. However, as a friend pointed out, what you can grow in the northeast versus what we can grow out in California makes the whole locavore eating thing easy for us west coasters. I don't know if I can do what my friend in Boston does, making herself winter squash smoothies in an effort to eat local.