After reading about this 1996 McDonalds hamburger, I could not buy prepackaged hamburger buns for our turkey burgers. I had to make them myself.

I used this recipe since the dough rising time was only 35 minutes and it was a mere hour before dinner. My only ingredient substitution was to use whole wheat flour instead of all-purpose flour since I'm a whole wheat kind of gal. 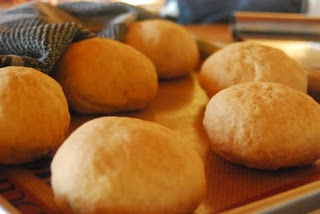 Fresh out of the oven buns: 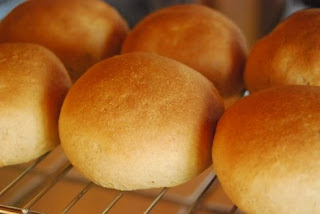 My total baking time was 16 minutes instead of the 10-12 minutes stated in the recipe, probably due to my flour substitution.

I have to give props to Martha. Despite mountain biking in a Martha Stewart Living t-shirt (hey, the t-shirt was free and I've never claimed to be a bad ass!), I'm not really a huge fan. However, the recipes in the Everyday Food: Great Food Fast live up to the book title's promise! This week, I made turkey burgers, roasted pears and sweet potatoes, and pasta with sausages and roasted peppers. The seasoning, texture, and visual appeal of the foods were spot on. As an added bonus, the book has a full color photograph of every recipe. This is a huge claim, but the recipes in here rival those in my favorite cookbook Vegetarian Cooking for Everyone.
Plucked from wildtomato at 9/26/2008