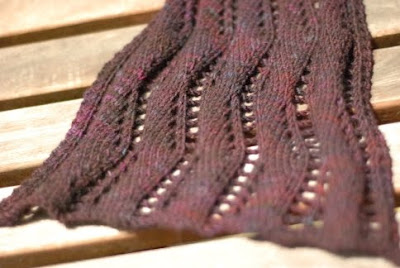 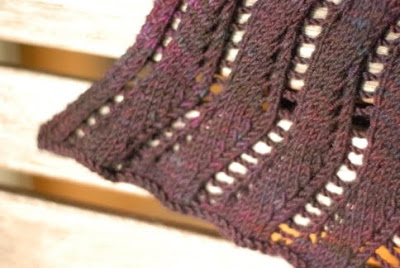 Veronik Avery's Lace Ribbon scarf was the first completed project of 2010. The yarn is Socks that Rock lightweight in a Rare Gem colorway - this was purchased a couple of years ago at Stitches West 2008 when STR was showcasing their Raven colorways. What took me so long to use this yarn is beyond me. It was lovely to work with, and I have high hopes that it will be durable as well since it is tightly spun. The pattern was also easy for me to memorize, so a lot of it was knit during holiday travel. 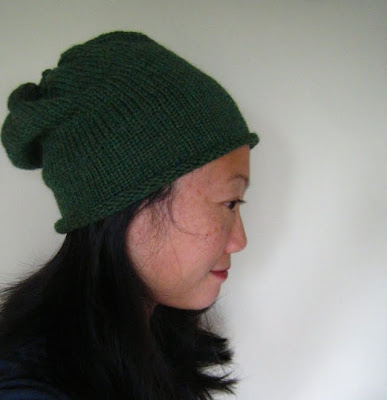 Or was the Felicity hat (.pdf file) my first 2010 FO? I'm not sure. This is the first one, knit for a friend's birthday. I finished another one in a different size for me, and I'm currently knitting a larger hat for the boy.

2010 will also be the year I clear my stash. At least it will be if I keep on going at this rate! I long for the fumes of new yarn, but I'm feeling frugal, so stash diving has been my mode of operation. I'm at the point where my stash mainly consists of odds and ends from other projects, so expect a lot of multiple colored projects.

One stash busting project has been these preemie caps. These will be donated to the UCSF neonatal intensive care unit (NICU). As a stash busting project, these hardily qualify since they are the tiniest things ever. I weighted one of the hats, and it was a mere 10 grams. Tiny! 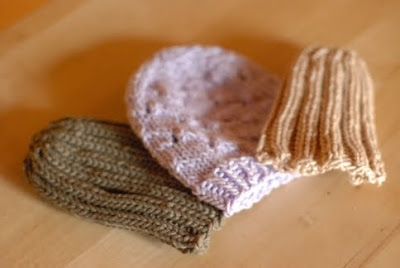 All this hat knitting is due to twitchy fingers that are trying to ignore finishing a cardigan. I swear I only have two more hours left of work, but it involves seaming and thinking, both things I don't feel like doing when I'm unwinding with yarn and needles. However, I wore my almost finished cardigan yesterday, and I want the finished project! Badly! So, hopefully, that will get me in gear enough to complete the cardigan by the end of this week. Or maybe not.

Mingus has also been avoiding thinking. Here's my boy not thinking about a toy he just gnawed. 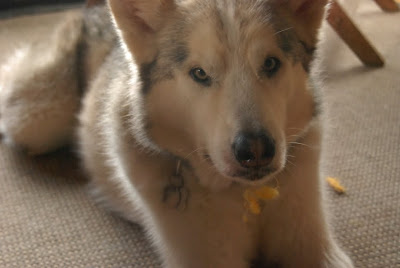