On Socks (and Food) 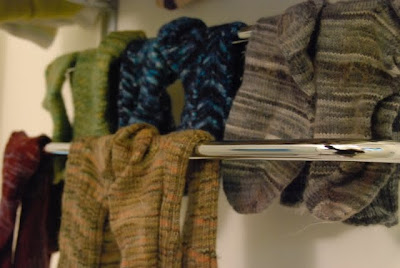 Sock drying day makes me smug and happy. Smug because, hey, I've made all those socks! They represent many knit nights and hours at The Pub. Happy because I know that these socks are worn and loved. It's chilly for us thin skinned Northern Californians, so these wool socks are in heavy rotation.

Before the end of 2009, I eeked out another pair of socks, this time using Malabrigo sock, the brand of sock yarn often whispered about in reverent tones with a groupie following similar to The Beatles. I've been knitting for over 3 years, and I had never worked with the stuff. 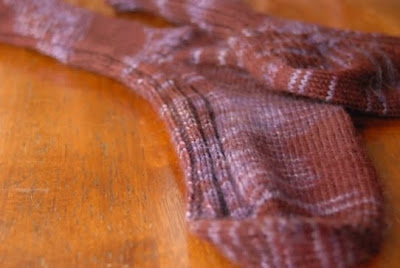 It was a joy to work with, although I'm a little worried about their durability since I've come to equate super soft and squishy yarn with holes that I need to patch up. Why would I think this? Example 1: Pigeon Roof Studio socks. 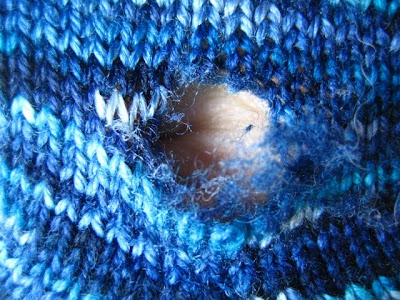 I didn't wear these socks anymore than my other ones, and in fact they are relatively new, but look at the size of that hole in the heel! The matching sock is also precariously close to another heel blow out. So sad. These socks have some nylon in them, too, so I thought they'd last a little longer, but 'tis not the case. If anyone has any ideas on how to mend these socks, please pipe in. For now, they are tucked away because I cannot bear to look at them.

So far, my most durable socks are the first pair I ever made, the ones that almost made me cry because I had been knitting for a couple of months and the figure eight cast on was close to defeating me. They are made from Trekking XXL. I will be buying more Trekking soon even if the colors don't make me swoon and they are not the softest things ever. After the heel blow out, I'd rather have marginally soft socks that are hard wearing.

Follow up report on the pork vindaloo: it was good! It also looked not so good after the pork butt had been slow cooked for 8 hours, so I decided to not post pictures. There wasn't any photo doctoring I could do that would make it look appetizing. I still need to tweak the recipe more because there were things I wasn't happy about, like the potatoes being thrown into the slow cooker at the beginning. I used russets, a dry potato, and they basically crumbled apart. Next time, I want to use waxy potatoes and I'll throw them into the stew much later. For those interested, I made my pork vindaloo based on this recipe.

In the slow cooker now is yet another round of chicken makhani (butter chicken). Good stuff, and even better if you substitute out the butter for ghee, clarified butter that is cooked until nutty brown and strained. I did not sew together 15 cardamon pods as suggested in the recipe because the whole point of slow cooking, to me, is easy. I did double the amount of garam masala, and I did make a huge batch of garam masala that I am almost done with since this is the third time I've made this recipe. The boy is sadly butter chickened out.

My next slow cooker experiment is going to be some sort of spinach dish. I have a bunch of spinach, some ghee, some ginger, garam masala, onions, and garlic. I also have some heavy cream should I decide to do a creamed spinach instead. Hm, have I ingested enough fat lately? (says the woman who is happily reading Fat: An Appreciation of a Misunderstood Ingredient, with Recipes right now.)
Plucked from wildtomato at 1/06/2010