Live from the Insane Asylum

Our house is being changed from "help, I'm in trouble!" yellow with a puke green trim to a suave, oh so sophisticated villita (grayish green) with a carbon trim. We've lived for three years in this house with its nauseating colors. Although we've always wanted to change it, things like vacation, kitchen remodels, and backyard landscaping get in the way. This summer, though, the boy had it and proclaimed that yellow made him sick and depressed. I told him that existentialism is a weak excuse for paining a house and that if he's inside the house, he wouldn't have this problem. In the end, though, I had to admit that our house, whose colors were picked by a 10-year old girl (no joke) would be much better if it wasn't used as a landmark by all our neighbors. "Just go up the road until you see the YELLOW house, and then turn left."

So, now we're going to be living in a villita and carbon house. How chic! But before that, we get to spend two weeks in a house where all the windows are taped up. It's an insane asylum here. Add to the the occasional burst of paint fumes that infiltrates the house during the day, and the drone of the compressors and sanders, and you have the perfect place to conduct interrogations and torture people. Unfortunately, though, this is also my workplace most of the time. And since I actually love my job and I do not associate work with torture, this is no good at all. Not having windows is killing me. When I complained about this to the boy, he said that existentialism is a weak excuse for not getting work done.

Ahem, so this is a knitting blog, right? Back to our regularly scheduled program for all 4 of you who actually read this. So, this is my newest project, a feather and fan lace pattern scarf. It's a surprisingly easy pattern for such impressive results. This is the same yarn I had originally earmarked for the bamboo lace, but I think it looks much better this way. I cast on 38 stitches and am working them on size five needles. The pattern is from Scarf Style. 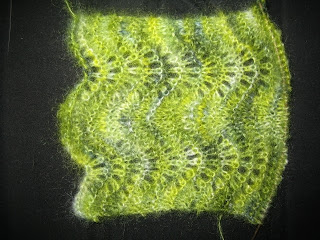 Oh, and for those of you who don't believe I have a cat, here she is. Fifty-Fifty sees all. Fifty-Fifty knows all. You must believe. 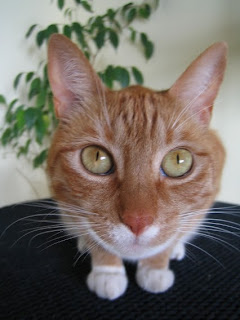